Windows 11 is just over a month away from its official release, which means that Microsoft is working overtime to crush any existing issues with the operating system. Unfortunately for testers, the latest Windows Insider Dev and Beta channel build introduced a rather nasty bug with the Star Menu Taskbar.

Microsoft's new Start Menu and Taskbar have had their ups and downs as users get acclimated to its visual and functional redesign compared to Windows 10, so this latest glitch is leading to more frustration. In the image provided below, you can see one outcome of the glitch, where it appears that the Taskbar doesn't load entirely on the affected system. 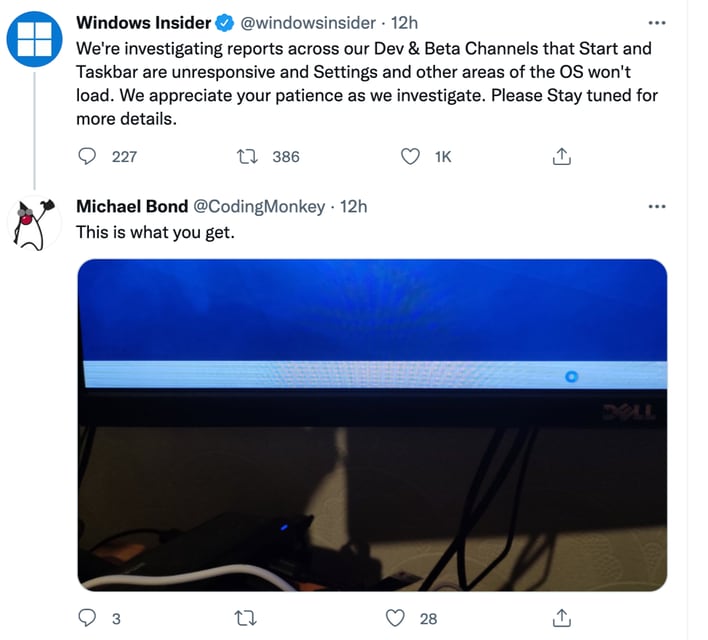 In other instances, Microsoft indicates that the Start Menu and Taskbar are simply unresponsive. According to Microsoft, the root cause of the problem was traced to "an issue with a server-side deployment" pushed out to Windows Insiders. So naturally, that update has been canceled until the issue can be resolved. In the meantime, Windows 11 Insiders that are currently having Taskbar problems can take the following steps to get back to some semblance of normalcy within the UI:

If you encountered this Taskbar problem after downloading the 22449 (Dev) and 22000.176 (Beta) builds, feel free to tell us about it in the comments section below. Also, let us know if Microsoft's fix solved the problem if you were affected.