AV Comparatives has posted the results of its latest performance impact test of over a dozen popular antivirus programs, and unfortunately for Microsoft, its Defender program that's built into Windows only narrowly avoided coming in dead last. On the bright side, though, Defender moved up from taking the last spot in the previous two performance roundups conducted in October 2021 and April 2021.
This time around it swapped places with Total Defense to take 16th place out of 17 security programs included in the roundup. Out of the 17 products tested, nine received an Advanced+ rating, the highest award available. Six others qualified for the Advanced badge, and the rest, including Defender, received the Standard award.
So what does that all even mean? For this particular roundup, AV Comparatives only looked at the impact each AV program had on system performance, and not each one's effectiveness at detecting and neutralizing security threats. Its test bed consisted of a low end configuration equipped with an Intel Core i3 processor, 4GB of RAM, and SSD storage. The independent testing lab then ran a series of tests on a clean install of Windows 10 20H2 (64-bit).
"Care was taken to minimize other factors that could influence the measurements and/or comparability of the systems. Optimizing processes/fingerprinting used by the products were also considered—this means that the results represent the impact on a system which has already been operated by the user for a while," AV Comparatives explains.
AV Comparatives repeated tests several times (without and without fingerprinting). Scenarios included file copying, archiving and unarchiving, installing applications, launching applications, downloading files, and browsing websites. Each test results in one of four rankings with a point system attached: Slow (0 points), Mediocre (5 points), Fast (10 points), and Very Fast (15 points). 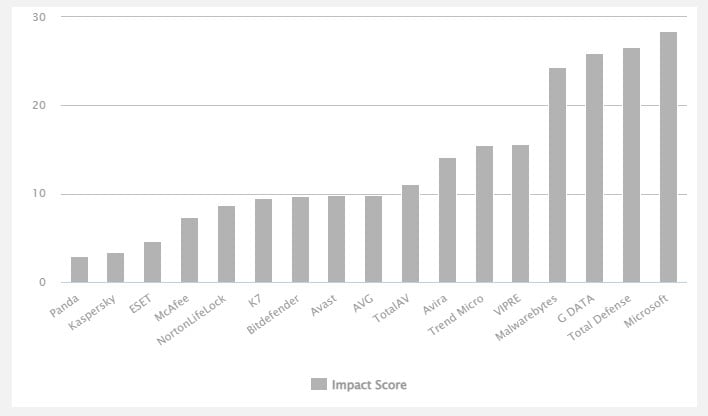 AV Comparatives also used PC Mark 10 to evaluate performance. When all was said and done, Microsoft earned an unimpressive Impact Score of 24.6. That was enough to edge out Total Defense, which scored 27.4, but it was nowhere near the top scores, the best of which was 1.6 achieved by K7. Even McAfee came out way ahead with an Impact Score of 7.2.
"We hope that with these tests we can keep users and vendors engaged in system security, and mitigating the ever-evolving threat landscape," said Andreas Clementi, co-founder of AV-Comparatives. "For these solutions to continue to grow and evolve, tests like these are extremely important to provide accuracy and accountability."
Clementi also makes it a point to say that "security is more important than speed." Defender does much better in that regard, earning the highest Advanced+ badge in the most recent malware protection roundup.
Whether you want to venture away from Defender to a third-party AV program and/or full-fledged internet security suite is obviously up to you. Personally, I've stuck with Defender for several years now, and found it works reasonably well when combined with smart computing habits.
What AV program do you use these days? Sound off in the comments section below.