For the second time this month, but really just the first time (more on that in a moment), Microsoft has officially confirmed it is embracing support for AMD's FidelityFX Super Resolution technology on its latest generation Xbox game consoles (Xbox Series X and Xbox Series S). To get things started, FSR is now available to preview within Microsoft's Game Development Kit (GDK).
So what is this business about a second confirmation, but not really? Well, earlier this month we reported on a comment Microsoft made that, on the surface, seemed to signify that FSR support was headed to the Xbox Series X/S. Judge for yourself.

"At Xbox, we're excited about the potential of AMD's FidelityFX Super Resolution technology as another great method for developers to increase frame rates and resolution. We will have more to share soon," Microsoft said at the time.
A representative for AMD tells us that was not meant to be an official confirmation, it was just construed that way in the media. So looking back, Microsoft was strongly hinting (not confirming) that FSR support was coming to Xbox consoles, it was just not ready to officially make that announcement. Until now. 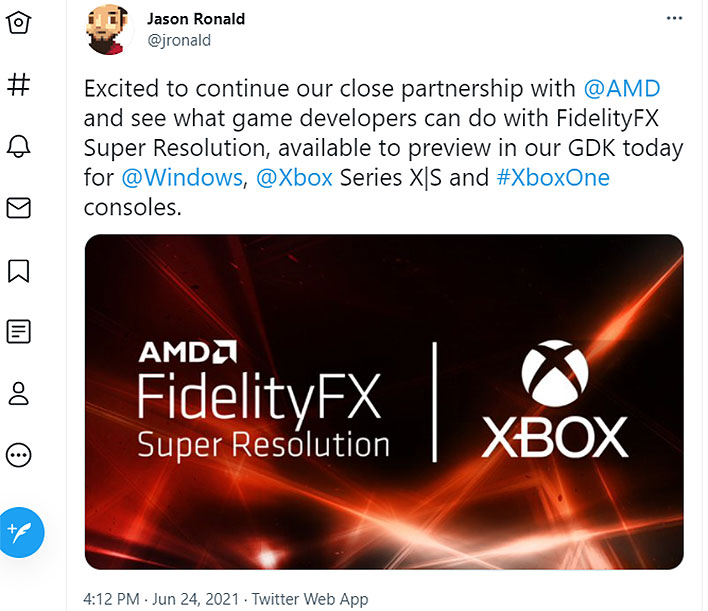 Regardless of the word play, we now know for sure that FSR is headed to the Xbox Series X/S. And as we pointed out before, this will be yet another FidelityFX tooled added to the GDK, in addition to Variable Shading, Contrast Adaptive Sharpening, and Denoiser.
"For gamers, AMD FidelityFX coming to Xbox Series X/S means that future Xbox games will be able to benefit from all the platform-specific optimizations and incredible visuals that FidelityFX already helps deliver on PC games," AMD said earlier this year.
This is potentially a big deal. FSR is an open source upscaling technology that aims to achieve the same thing as NVIDIA's proprietary Deep Learning Super Sampling (DLSS) technology, just in a different way. By taking a lower resolution image and upscaling it, gamers can enjoy higher resolution visuals while putting less strain on their GPU hardware.
NVIDIA's latest iteration (DLSS 2.0) does a wonderful job with this, both in terms of performance and the resulting image quality. It remains to be seen how FSR will perform in comparison, but we are optimistic. And getting Microsoft to embrace the technology on its Xbox consoles means there is a better chance at widespread developer support, at least in time. That should also trickle into the PC space.
Now the big question is, will Sony embrace FSR on its PlayStation 5 consoles as well? Nothing has been announced or really even hinted at this point, but we wouldn't be surprised if FSR found its way to Sony's latest generation consoles as well.