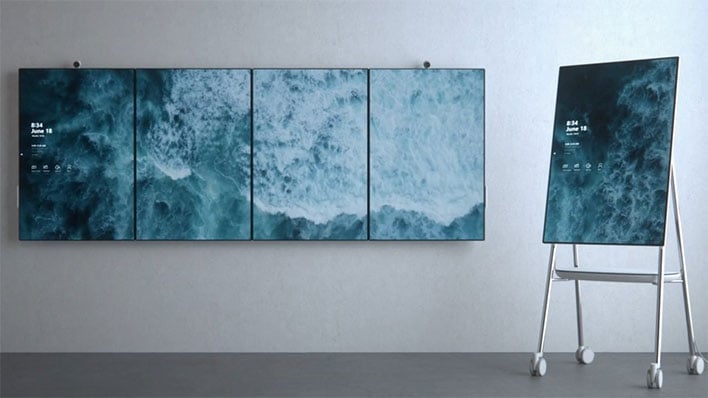 "may or may not" pic.twitter.com/Ftx7WDGeQW

"We are still committed to developing the other two areas, tiling and rotation, and we are working with customers to assess the best way to deliver them. But when those features are released, they may be released as a different product or they may not be. They might not require an upgrade for Surface Hub 2S customers, or they may not require a paid compute cartridge swap," a Microsoft representative said.
It is a bit of an open-ended affair, though Microsoft did make clear in the webcast that this is a shift in the company's roadmap.
"We don't have plans to release a compute cartridge in 2020, because the best way to release those capabilities—tilting and rotation—may not require us to take that path," the representative added.
The cancellation of the Surface Hub 2X and uncertainty over future models is disappointing on the surface (see what we did there?), but could end up being for the better. It depends on whether Microsoft is actually able to bring the Surface Hub 2X's unique feature to the Surface Hub 2S with a simple software update, and how long it takes to arrive.
To that end, Microsoft is not saying a whole lot. It a statement provided to The Verge, Microsoft says it has "ongoing dialogue with our customers on Hub and are working to align the roadmap to best meet their needs," adding its "top two priorities for Hub in 2020 are deploying the 85-inch device and rolling out an OS update that includes many of the top features customers have been requesting since Surface Hub 2S launched."
Whatever those features are, they will arrive at no cost to Surface Hub 2S and Surface Hub 1 owners. Microsoft says it will have more information in coming months. Until then, we wait.