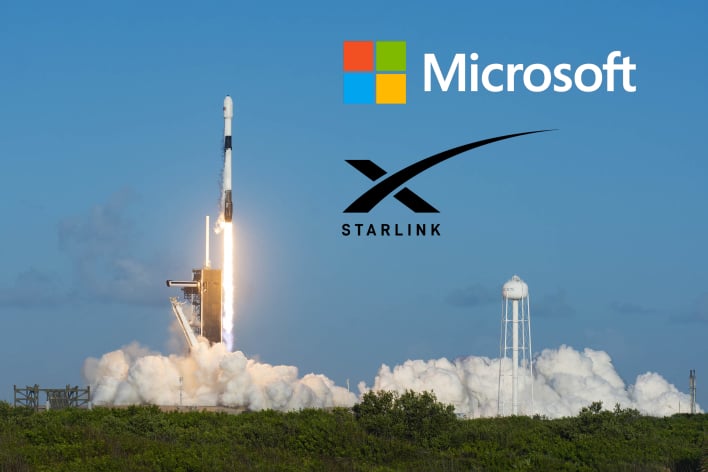 Microsoft Azure is blasting off to space with SpaceX’s Starlink satellites. Microsoft and Elon Musk’s company will be partnering to connect the Microsoft Azure cloud computing network to the Starlink internet service.

A few weeks ago, Microsoft announced Azure Orbital, a way for satellites to connect to the cloud. With this new partnership, Azure Orbital will likely expand and provide more options for a growing satellite internet market. Gwynne Shotwell, SpaceX president and COO, said that “The collaboration that we’re announcing today will allow us to work together to deliver new offerings for both the public and the private sector to deliver connectivity through Starlink for use on Azure.”

The Azure Orbital and SpaceX partnership is arriving simultaneously with competing AWS services that are getting satellite connectivity. CNBC reports that Jeff Bezos’ Amazon is also working on a Starlink competitor, Kuiper. If Starlink and Azure Orbital get to space first, they may have a better market share in the future. This is practically a space race of satellites between SpaceX and Amazon.

This partnership has likely been in the works for some time. It is reported that there have been tests going on in the background in recent months. According to Microsoft, the Starlink network can connect Microsoft data centers, as well as a new product called “Azure Modular Data center.” This semi-trailer sized data center product is “for customers who need cloud computing capabilities in hybrid or challenging environments, including remote areas.” It could be incredibly useful for rebuilding and fixing damaged infrastructure after natural disasters. This falls in line with SpaceX’s goals at present, as it has provided connectivity to first responders in the U.S with the wildfires on the west coast.

All-in-all, this is a fascinating development of technology, and this partnership could open doors to new opportunities for both companies. As Tom Keane, Microsoft’s corporate vice president of Azure Global, puts it, “SpaceX is of course the name that people immediately think of when they think of innovation and the evolution that’s occurring to bring space technology into the 21st century.” With Microsoft and SpaceX working together, Azure could become “the platform and ecosystem of choice for the mission needs of the space community.”