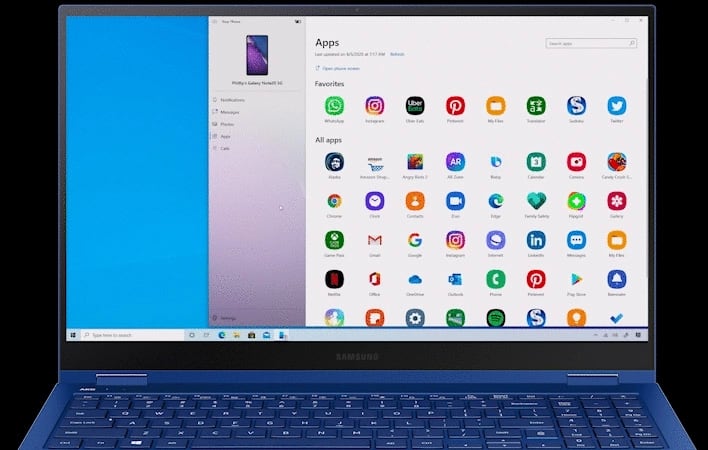 Back in early August, Microsoft and Samsung announced a partnership that expanded Your Phone functionality for Galaxy devices. Most importantly, the two announced that Samsung Galaxy devices would be able to leverage the Your Phone app to run Android apps directly in Windows 10.

The only problem with the early announcement was that the Your Phone app only initially supported the new Galaxy Note 20 and Galaxy Note 20 Ultra. In the weeks that followed, Microsoft slowly added support for additional Galaxy devices. However, Microsoft just announced today that it has rolled out the ability to run Android apps in Windows 10 to all supported Galaxy devices. The company does note that it could take up to 48 hours for the changes to propagate to everyone using the Your Phone app.

We are excited to announce that the Apps feature is now rolled out to everyone with supported devices (It may take up to 48hrs. to show up). It allows you to instantly access your Android phone’s mobile apps directly from your Windows 10 PC. Learn more: https://t.co/vASs8SCCVW pic.twitter.com/xUOaMmfALU

With Your Phone apps, you can instantly access the Android apps installed on your mobile device right on your PC. Using a Wi-Fi connection, Apps allows you to browse, play, order, chat, and more – all while using your PC’s larger screen and keyboard. You can add your Android apps as favorites on your PC, pin them to your Start menu and taskbar, and open them in separate windows to use side-by-side with apps on your PC – helping you stay productive.

At the moment, these are all of the Samsung Galaxy devices that support Android apps in Windows 10.

We should mention that it’s definitely handy to be able to run Android apps on your Windows 10 desktop or laptop, but there are some limitations. For example, unlike Samsung’s own DeX solution, you can only run one app at a time. The biggest limitation, however, is that this support is only available on Samsung smartphones. We’re glad that Microsoft has seen fit to work closely with Samsung in recent years, but it would be nice if the company would extend support to additional popular Android OEMs like Google, OnePlus, LG, and Motorola.

It’s also quite interesting that even Microsoft’s newly released Surface Duo doesn’t yet support running Android apps in Windows 10, although we’d imagine that the support will be arriving shortly.