Are you a Meta Quest 2 user who uses their PC to play higher fidelity VR games? Have you noticed a bit of judder and stutter in your headset if you're on Windows 11? You're not alone, and there's a fix.

It is a problem that has plagued Windows 11 virtual reality users since the launch of the operating system in May of 2021. Essentially when the headset judders it will cause what other people may refer to as a stutter, or momentary freeze in visuals. A glitch in the matrix, if you will. This can cause nausea and break immersion especially if you're in a high-fidelity game. This issue becomes even more apparent with devices like Air Link, which allows users to connect to a PC wirelessly instead of using a wired connection.

Luckily, head of Meta Reality Labs John Carmack tweeted that he believes the team may have it under control, as shown below.


Some timing details changed in Win 11. We think we have a handle on it, and an update is in the pipeline, but I can't say exactly when it will land. Sorry it has taken so long.

While he does believe there is a resolution at hand, it's not perfect. The virtual reality news site, UploadVR, has provided the info for users to try to get access to this fix a little early. That fix is to turn on the Public Test Channel.


To enroll in Public Test Channel, head into the Meta settings, then head to the Beta tab, towards the top is a switch that let you turn on Public Test Channel. Once enabled you will need to wait for the update to download and restart the devices associated. 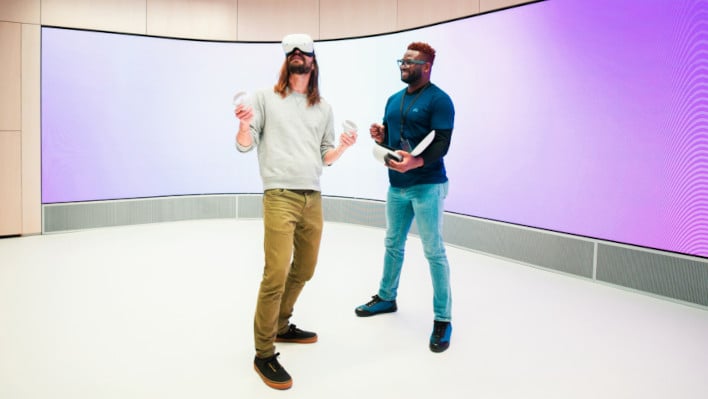 As stated, the fix isn't perfect and some users will likely still see some judder though it should be better. However, this is still considered a beta channel, and as such users may experience instability anyway. So if you are concerned about that we would advise not adding it unless that juddering in Windows 11 is just unbearable to you.