It's no secret that Mark Zuckerberg is heavily invested in VR technologies and how those advancements will drive the shift to the metaverse. It's such a big part of what's going on at Facebook that the company rebranded itself as Meta. More than just a name change, Meta is currently working on a whole bunch of prototype headsets, many of them built around a different and specific technology goal.
For example, a prototype display called Butterscotch that purportedly allows the wearer to "comfortably read the smallest letters on an eye chart," according to Zuckerberg. The overarching design goal represented by Butterscotch is achieving retinal resolution, which is what Meta has identified as one of the keys in achieving a display that is as "vivid and realistic as the physical world, and much more advanced than traditional computer screens we use today."
Meta's definition of retinal resolution is reaching around 60 pixels per degree. Butterscotch offers around twice the resolution as the Quest 2, but is "nowhere near shippable." 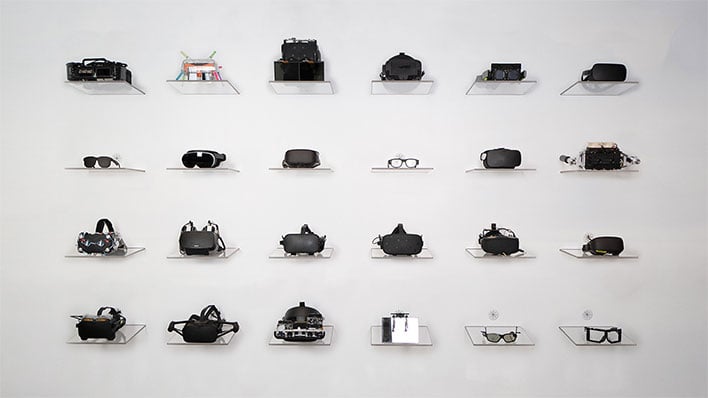 It's just one of at least two dozen VR headsets at Meta. During a recent roundtable, Zuckerberg, Reality Labs chief scientist Michael Abrash, and other Reality Labs members shared some insight into what VR headset technologies Meta is developing. According to The Verge, Meta referred to its wall of prototypes shown above as time machines, most of them big and unwieldy for the purpose of testing a specific feature.

"I think we’re in the middle right now of a big step forward towards realism. I don’t think it’s going to be that long until we can create scenes with basically perfect fidelity," Zuckerberg said at the event.
Another prototype codenamed Starburst is even further away from being a shippable product, but is interesting in that it's an HDR VR headset. Zuckerberg says he believes it's the first of its kind, though MageneX may dispute the claim.
Regardless, what's at play here is a headset with a lamp that produces an incredibly bright 20,000 nits. Zuckerberg says it's "wildly impractical" to try and port into a consumer product at this time, but Meta is using it as a testbed.

Showing some new prototype VR displays as part of our research to make the metaverse as realistic as the physical world. Need to solve challenges with retinal resolution, multiple focal depths, high dynamic range and more -- and then fit all that tech into devices lighter / thinner than anything that exists. We have the best teams in the world working on all these problems.

As for the most promising of the bunch that we teased in the headline? That would be Holocake 2, a working experimental device that is supposedly lighter and thinner than any VR headset device that currently exists.
Holocake 2 employs holographic displays, and according to Zuckberg it can already play PC VR experiences. It looks fairly sleek, falling somewhere in between a full-on headset and glasses. As far as Meta is concerned, it has the most compact optics of any Quest 2-class headset.
The challenge with Holocake 2 is finding a suitable laser source to drive those optics. But should that be achieved, Meta feels it would create a clear path to VR displays in a sunglasses form factor. It also hopes to cram the technologies from all of its VR headset prototypes into a single model sometime down the road.