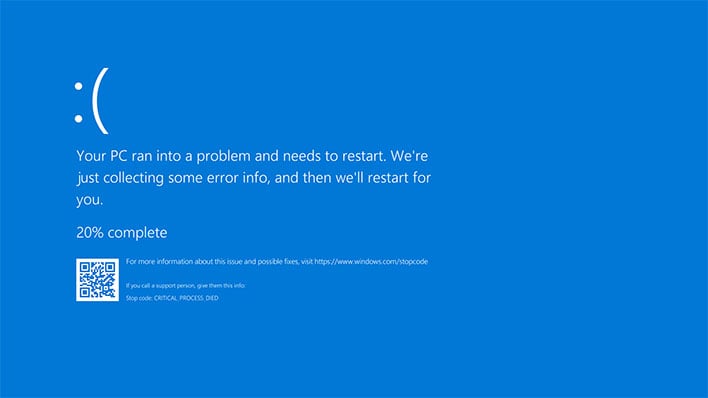 I've mostly had good luck with Windows 10 (*knock on wood*), though the last time I made the same claim, I experienced a blue screen error for the first time in a very long time—I take some responsibility for failing to knock on wood. I'm not making the same mistake twice, especially with some users reporting blue screen of death (BSOD) errors related to a recent update.
The troublesome update is KB4540673. The list of highlights include the following fixes and improvements...
Microsoft began pushing the KB4540673 update to the public as part of this month's Patch Tuesday roll out, and apparently it is causing some problems. Yes, the same Patch Tuesday update that revealed a nasty wormable Windows exploit.

"After installing it I started having BSOD every time I started my PC. Only solution I had was rolling back to a previous restore points of some days ago," a user wrote on Windows Latest's forums.
It does not appear to be a widespread issue, but the above account is not the only one circulating. Other similar comments have been made, including by a user who claims the March update resulted in BSODs on both his gaming PC and work laptop. There's also a related discussion on Reddit.
As far as I can tell, Microsoft has not acknowledged any problems with the update in question, so who knows when or if subsequent patch will be made available. In the meantime, affected users may wish to uninstall KB4540673.

Not everything is bad news when it comes to Windows updates. It relates to the Reserved Storage feature in Windows 10, which Microsoft introduced with the May 2019 Update. As its name implies, it configures Windows 10 to reserve a certain portion of available storage to install updates and drivers, and it can take up more than 10GB of space.
It is not a partition, though users can manage it by making changes to the system Registry. Not everyone is comfortable mucking around in the Registry, and so starting with Windows 10 version 2004 (20H1), Microsoft will make easier to manage Reserved Storage, according to Windows Latest.
The upcoming update will include Deployment Image Service and Management (DISM) options for Reserved Storage, so uses can disable it to free up disk space. Likewise, users can use the tool to check the status of Reserved Storage.
Users can input the following commands in a command prompt...
The average user will probably want to leave things alone. However, if you're comfortable making changes to how Windows works its mojo and are short on storage space, it will soon be easy to do.