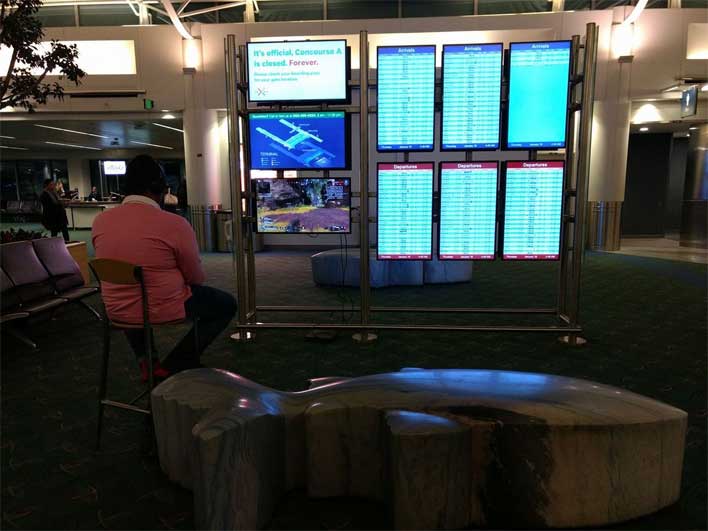 A man traveling through Portland International Airport apparently had a layover long enough that he decided to play some video games. Playing games at the airport isn't such a big deal if you're using something like a Nintendo Switch, laptop, or smartphone. Where gaming at the airport can become a big deal is if your preferred gaming platform, and the one you're traveling with in your bag, is a PlayStation 4.

The man decided that he would hook his PS4 up to one of the official monitors in the terminal and get his game on. The image seen above is of the man playing Fortnite, taking over a monitor that usually displays a map of the airport. He also appears to have graciously dragged a chair over into the middle of the terminal waiting area from another location and has cords sitting in the middle of the walkway.

According to a spokesman for the airport, Kama Simonds, airport officials did ask the man to unplug his equipment from the monitor and stop playing games. Simonds said of the incident is something they "obviously" don't want to happen. The spokesperson said the travelers need the information on the screens.

Simonds went on to add that the man asked "very politely" if he could finish his game. He was told no and to unplug immediately. For someone to travel with the PS4 console, using monitors at airports must be something he frequently does. Simonds says that the entire interaction between airport officials and the gamer was "very polite and cordial." The airport spokesperson said this is a good reminder of what not to do at the airport.

In other PS4 news, in December an official PS4 controller back button attachment debuted. And later this year, the company's next-generation PlayStation 5 will launch with AMD Ryzen power.