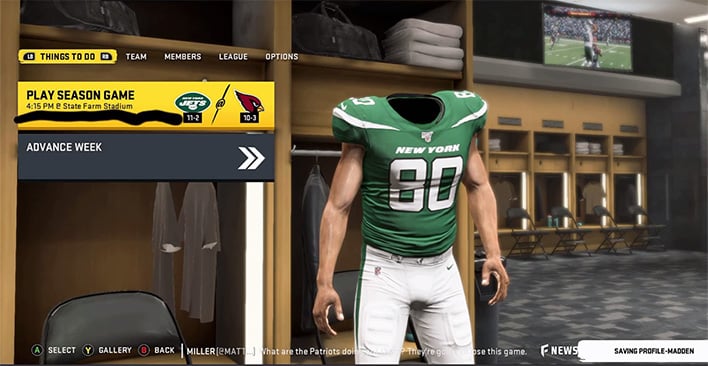 I have a running joke when watching football games, where any time someone's helmet comes flying off as a result of a hard hit, I feign shock at their entire head separating from their body (yes, my family is tired of the running gag). Nobody actually loses their noggin in the NFL, but you might come across a headless player in Madden NFL 21, along with a whole bunch of other glitches.

To be clear, I have not actually played Madden NFL 21. However, a glance around the web reveals a plethora of annoying and sometimes hilarious glitches. Like misspelled names, quirky physics, and a cut scene with an invisible football coach (as a result of a rendering glitch) talking to one of his players about transparency. TRANSPARENCY -- HAHA!
On the not so amusing side (for Electronic Arts), the state in which the game shipped in has resulted in an undesirable record, having achieved the lowest User Score ever on Metacritic. It's currently sitting ugly with a 0.4 User Score based on 1,697 ratings, for the PlayStation 4 version (0.6 on the Xbox One and 1.1 on PC).
The new low score replaces Warcraft III: Reforged as worst user-rated game on Metacritic, which previously held the title with a 0.6 User Score out of 30,431 ratings. At the time of this writing, Madden NFL 21 for PS4 has only 32 positive user reviews and 14 mixed reviews, versus 1,651 negative evaluations.
Naturally you have to take this sort of thing with a grain of salt. However, on the Critic side of the equation, Madden NFL 21 for PS4 is sitting with a ho-hum 62 rating, with four positive reviews, 11 mixed reviews, and one negative review, which said "Madden 21 is a mess."

Here's a look at some of the glitches, collected and uploaded to YouTube by Limit Break...
I'm especially amused by the rushing ability of Atlanta Falcons defensive tackle, Grady Jarret, who picks up a fumble and plows his way 40 yards with impunity to pay dirt. By my count, he eluded 14 attempts at tackling, which makes me question why he's playing defense instead of serving as Atlanta's star running back. Seriously, that's some impressive rushing ability.
It's far from the only comical glitch, though. There's a shot of Philadelphia Eagles quarterback Carson Wentz throwing a bullet pass...three yards into the ground, as if someone coated the pigskin in petroleum jelly as a gag.

The more you look around the web, the more quirky examples of obvious bugs come to light. Like a receiver dog-paddling in a circle after catching the ball, right in front of the end zone, as even the opposing team sits around and watches in bewilderment. I'd do the same thing, honestly, or maybe call for a medic.

Be that all as it may, I might considering picking this one up for the bugs. What about you?