It can sometimes be difficult to live up to lofty expectations, and Apple definitely piled the hype on its latest MacBook Pro models, powered by its next-generation M1 Max and M1 Pro custom silicon. But will the upgraded MacBook Pro lineup ultimately buckle under the weight of a mountain of hype and expectations? Perhaps not, depending on how much you want to read into some early benchmarks.
There's a new listing at the GFXBench database that purportedly highlights a benchmark run obtained from the bigger of Apple's two updated chunks of silicon, the M1 Max. We'll get to the numbers in a moment, but let's quickly recap the specifications and performance claims. 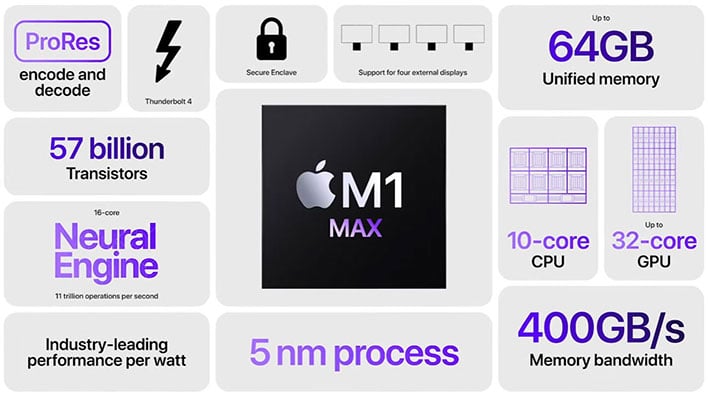 The M1 Max positions itself as Apple's newest flagship chip. It is built on a 5-nanometer manufacturing process (TSMC, no doubt) and wields 57 billion transistors, for what amounts to the biggest chip Apple ever designed. It is also the most powerful, with a 10-core CPU comprised of eight high-performance cores and two power-efficient cores, and up to a 32-core GPU.
You can see some of the other highlights in the infographic above, such as 400GB/ of memory bandwidth, up to 64GB of unified memory, and a few other odds and ends. But here's the kicker—Apple claims the M1 Max can deliver the same graphics performance as a high-end gaming laptop with a mobile GeForce RTX 3080, while consuming 100W less power.
Okay, on to the benchmark run... 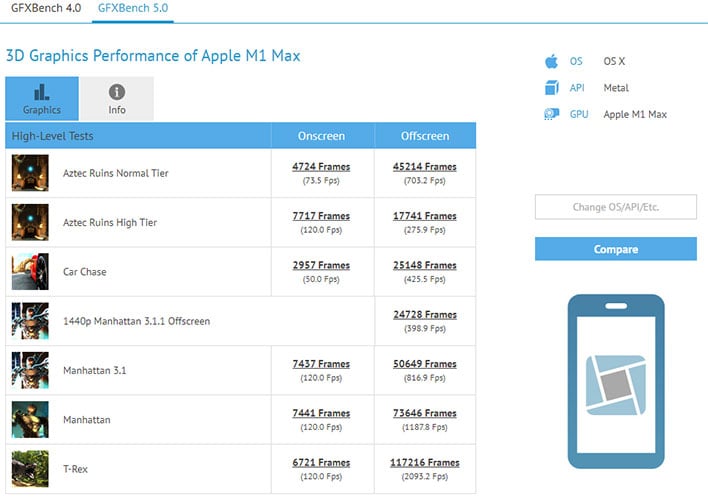 A user on Reddit spotted the above GFXBench performance results, and they are interesting indeed, albeit obviously limited in scope. According to the database entry, Apple's M1 Max chip obtained these numbers, with the SoC achieving 703.2 frames per second in the Aztec Ruins Normal Tier (Offscreen, 1080p), and 275.9 frames per second in the Aztec Ruins High Tier (Offscreen, 1440p). Note that Offscreen results are more accurate than Onscreen for this sort of thing, because it removes the screen resolution as a potential factor.

We don't have our own RTX 3070 numbers to compare against, but the user highlighted results obtained from Anandtech, which show a Razer Blade 15 laptop with a mobile GeForce RTX 3070 averaging 563 frames per second in the Aztec Ruins Normal Tier and 224.30 frames per second in the Aztec Ruins High Tier.
In the 1080p benchmark, that works out to a nearly 30 percent performance advantage for the M1 Max over the GeForce RTX 3070, and a 23 percent jump at 1440p.
While we didn't have an RTX 3070 laptop on hand, we did have a notebook with a lower TGP GeForce RTX 3080, and decided to run our own numbers. Here's what we got with Vulkan...

On our system, the mobile GeForce RTX 3080 averaged just shy of 711 frames per second in the Offscreen Normal Tier (1080p) test, and 290.41 frames per second in the Offscreen High Tier (1440p). Those work to 1.1 percent and 5.3 percent gains, respectively. Or put another way, the M1 Max, as represented in the leaked benchmark, hangs with the mobile GeForce RTX 3080 (lower power variant).
We also tested the laptop with DirectX 12...

This time around, it mustered 649.4 frames per second in the Offscreen Normal Tier (1080p) and right at 265 frames per second at the Offscreen High Tier (1440p). That tilts the former in the M1 Max's favor by 8.3 percent, and the latter by 4.1 percent. So again, we see Apple's chip hanging with the mobile GeForce RTX 3080 (based on the leaked M1 Max results, that is).

Potentially interesting for sure, but also not without a pocket full of caveats. This is a synthetic benchmark, and results can sometimes be all over the place. Secondly, Apple's revamped MacBook Pro is unreleased hardware. We have no idea what the testing conditions were. And of course this just a single benchmark suite, so this is not a comprehensive peek at performance by any stretch.
Anyway, we'll be keeping an eye out for more leaks in the future, and of course hope to obtain our own benchmark results if and when the opportunity presents itself.