Apple might consider itself to be a company that produces premium hardware that is a notch above garden-variety PCs on the market, but the company has had its fair share of high-profile hardware/design failures in recent years. The most embarrassing stain on Apple’s reputation in recent years is no doubt the troublesome butterfly keyboard, which proliferated throughout the company’s entire MacBook family for four years.

Now, it appears that Apple is admitting to another design defect with its hardware, and this time it involves the Retina MacBook Air laptops. In this instance, the anti-reflective coating can wear off or “delaminate” from the display. Once this happens, the display looks horrid with unsightly blotches all over.

The folks at MacRumors obtained an internal memo that Apple sent out to its Apple Authorized Service Providers that references the issue. The Cupertino, California-based company had previously only admitted to problems with the MacBook Pro and the [now discontinued] MacBook (the images in this article are from various MacBook Pro models). 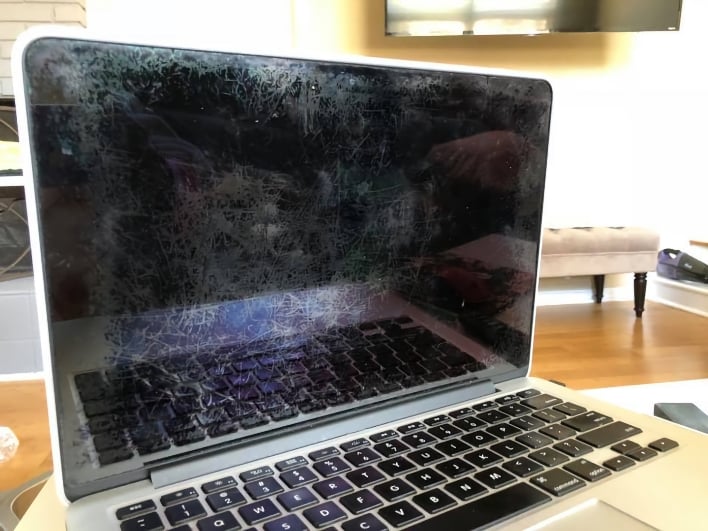 The new documentation, however, has been updated to state, "Retina displays on some MacBook, MacBook Air, and MacBook Pro computers can exhibit anti-reflective (AR) coating issues," emphasis ours.

Apple is often reticent to admitting to any design defects to the public, and even when it does, it often says that its only affects a “small number” of customers. However, Apple couldn’t escape the thousands of customers that forced its hand to act via various Apple Support Communities threads, Facebook posts, and the Staingate website.

But even with the word being out about the anti-reflective coating woes, MacRumors says that Apple has never publicly acknowledged it and only handles “free in-warranty” repairs on a case-by-case basis.

(Images in this article are from the MacBook Retina Facebook Group)