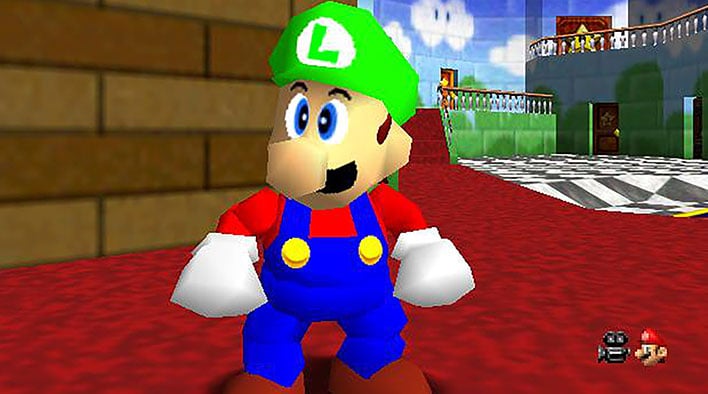 The recent Nintendo “Gigaleak” has provided the Internet with the source code for several classic Nintendo games. Those who have dug through the leaks have found everything from unused minigames to early prototypes for Yoshi and Donkey Kong. Fans have now discovered an even bigger surprise from this leak. Fan-favorite Luigi was discovered in the source code for Super Mario 64.

Super Mario 64 was originally released in 1996 for the Nintendo 64. The developers originally intended to include Luigi as a playable character in multiplayer mode. According to a 1996 interview with Shigeru Miyamoto, Luigi did not make it into the final version of the game due to “memory issues.” The team had talked about including Luigi in a minigame but decided against the idea. They argued, “most users probably only have that one controller when they first buy their N64, for that reason (and others) we decided not to.”

Many people believed for several years that Luigi was a secret character in the game. This rumor was proven false, but fans were still eager to see Luigi incorporated into the game. Luigi was included as a playable character in the 2004 remake of the Super Mario 64 for the Nintendo DS.

Luigi has been hiding in the source code of Super Mario 64 for 24 years, Thanks to the Nintendo leaks and modders for reconstructing.

in a 1996 interview https://t.co/L8ujU2w8kH Shigeru Miyamoto talks about having wanted Luigi as a second playable character in the game pic.twitter.com/JojGnzCGVP

However, fans of the game have dug into the leaks and found an early prototype and even unused voice acting for Luigi. Modders have already even created their own renditions of Luigi based off of the leaks. The images appear as if they were plucked straight out of Super Mario 64.

This recent leak also seems to be related to a longstanding theory that has been floating on the Internet for quite some time. Many Nintendo fans are likely familiar with the “L is Real 2401” theory. There is a statue that depicts a star in the Castle Courtyard in Super Mario 64. There is a blurry inscription at the bottom of the statue that has been interpreted in various ways. Some players claim that the inscription reads “Eternal Star" at some angles or "L is real 2401" from other angles.

Fans latched on to the latter description and argued that the "L" stood for Luigi. They insisted that this description hinted that Luigi was meant to be in the game. Interestingly, it has been twenty-four years and one month (2401) since the game’s release in Japan.

The recent leak has certainly been an interesting peek into Nintendo history. It is rumored that Super Mario 64, Super Mario Sunshine, and Super Mario Galaxy will be remastered for the Nintendo Switch this coming year. The original Super Mario Bros. game is celebrating its 35th anniversary and many believe that Nintendo plans to commemorate in a big way. Nothing has been confirmed, but it is certainly likely that something will be released by the holidays.