It is crazy to think how far electric vehicle (EV) technology has come in such a relatively short time. Raw performance is far from an afterthought, and in case anyone might still believe otherwise, Lucid took its Air Dream Edition EV to the track and posted a downright impressive 9.9-second quarter-mile. That qualifies it as the world's quickest production sedan.
The Air Dream Edition is also the first EV to achieve a quarter-mile run in under 10 seconds, beating Tesla to the punch. It can also zoom from 0 to 60 miles per hour in just 2.5 seconds, and has a top speed of 200 MPH. All of those metrics leave my hybrid 2019 Honda Insight in the dust, which is not surprising, considering what is underneath the hood of the Air Dream Edition.

"Lucid’s line of powerful, compact, and ultra-efficient motors are combined with an integrated transmission and differential, as well as our high voltage, silicon-carbide MOSFET inverter, to create a state-of-the-art electric drive unit. Each unit packs over 650HP and can spin to 20,000RPM, yet weighs only 163lb (74kg) and is small enough to fit inside a standard airplane carry-on bag," Lucid explains.
The dual-motor design of the Air Dream Edition yields a staggering 1,080HP, along with 2,950 lb-ft of torque. And according to Lucid, all of its Air models have long range capabilities, with certain models having the ability to travel up to an estimated EPA range of 517 miles on a single charge. Lucid also claims the Air can charge at rates of up to 300 miles in 20 minutes. Impressive stuff. 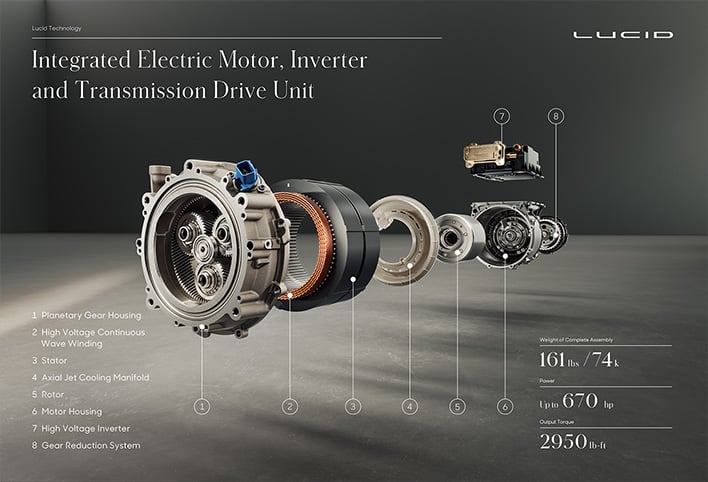 "These achievements are the result of multiple innovations. Elegant motor-winding technology maximizes power output and reduces electrical losses, while an innovative cooling system removes heat from the stator winding, minimizing losses and boosting efficiency. The transmission and differential, meanwhile, have been fully integrated for the first time in an electric motor: together, they comprise a single rotational system that is both lightweight and efficient," Lucid says.
The Air Dream Edition's speedy quarter-mile puts it in league with some of the fastest gas powered vehicles, like the Porsche 918 Spyder, though it did not quite catch up to Ford's 50th Anniversary Mustang Cobra Jet, which took 8.5 seconds. A more apples-to-apples comparison is the Tesla Model S, and the Air Dream Edition is the faster EV. Good stuff.
Tesla, the electric ball is your court.