If you have been lusting after LG's delightfully unique Wing smartphone with 5G connectivity, now is the opportune time to pounce. It launched at $999 just a few months, falling squarely into premium pricing territory, and for some, making it cost prohibitive. But with LG exiting the smartphone business (don't let that scare you away, more on this in a moment), you can grab the Wing at a deep discount right now.
As in, the LG Wing is selling for $599.99 at T-Mobile. That is a huge $400 savings over the phone's list price, which is a pretty amazing deal when you factor in the hardware, features, and of course the swiveling screen that transforms the smartphone into a multi-display, T-shaped handset that lends itself to some nifty use-cases.
Before we go on, however, let's address the elephant in the room. LG is bowing out of the brutally competitive smartphone market, leaving the likes of Samsung and other Android phone makers to duke it out (and of course Apple owns the iOS market completely). So is it worth considering the Wing even at a deep discount? Absolutely.
Even though LG is ducking out of the smartphone sector, it has promised to support its premium handsets with up to three OS updates, depending on the model and when it was released. More specifically, most premium phones released in 2019 or later will get three major OS upgrades from LG, and that includes the discounted Wing that is on sale at T-Mobile. 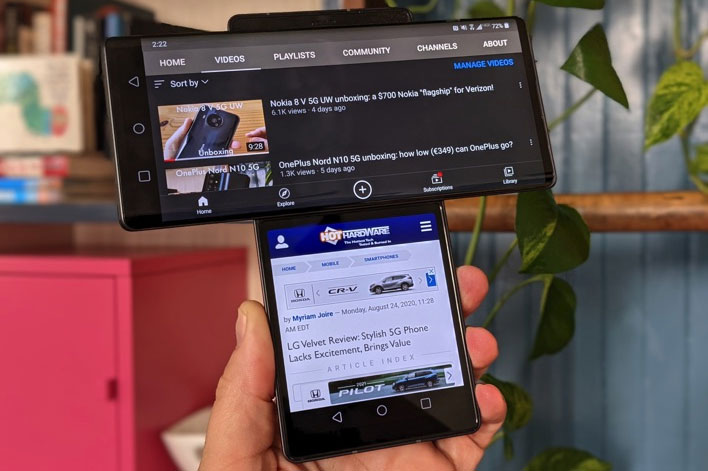 That out of the way, let's talk about the Wing. It sports a swiveling 6.9-inch main OLED display with a 2460x1080 resolution and 60Hz refresh rate, as well as a 3.9-inch half OLED screen tucked underneath, with a 1240x1080 resolution and the same 60Hz refresh rate. Each display has its own notification shade, quick settings, and app drawer.
Powering the phone is a Qualcomm Snapdragon 765G processor and 8GB of RAM. It also features 256GB of built-in storage, which you can expand via microSD, a 4,000 mAh battery, a 32-megapixl front camera, and triple rear camera arrangement with a 64-megapixel main shooter, 13-megapixel ultra-wide lens, and 12-megapixel ultra-wide lens.
Is the phone any good, though? Well, there's some bloat out of the box, and the lack of a headphone jack is a bummer. But in our hands-on experience, we came away impressed with the beautiful screens, excellent battery life, decent camera performance, wireless charging capability, and various other bits. It's certainly worth considering at this price.