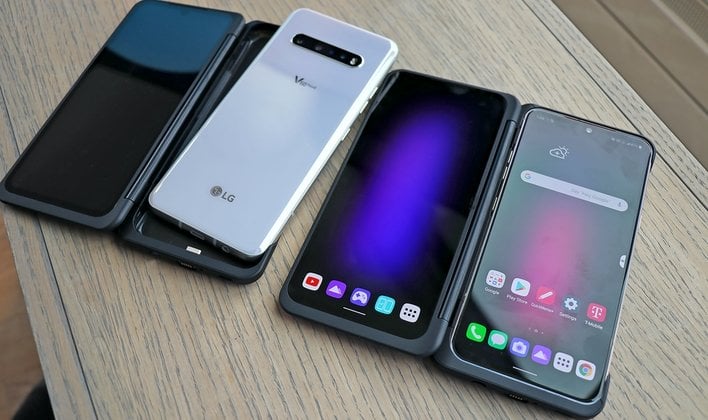 While 5G coverage certainly isn't widely available from major carriers around the United States today, many people looking to upgrade to a new smartphone want one that is 5G compatible. One of the most recent 5G-compatible smartphones that has been announced is the LG V60 ThinQ 5G with dual screens. This isn't a folding screen smartphone like the Galaxy Fold or Motorola Razer. Instead, it has two separate screens on each side of a smartphone that opens like a book (when using the Dual Screen accessory).

Three of the four major carriers have announced that they will be selling the LG V60 ThinQ 5G. On AT&T, the device will be available starting on March 20, and will be offered for free to those who add a new line or switch to AT&T. AT&T is also bragging about expanding its 5G network into 20 new markets to coincide with the launch of the smartphone.

On Verizon, the LG V60 ThinQ 5G UW will go on sale in blue or white starting on March 26. It will cost $39.58 per month for 24 months on a Verizon Device Payment plan, or can be purchased outright for $949.99 and get one free when adding a new line with unlimited.

T-Mobile will offer the smartphone starting on March 20, and it will be offered on a BOGO deal. That means customers who buy one LG V60 ThinQ 5G can get a second for free after bill credits. The smartphone with 128 GB of storage in white or blue will cost $33.34 per month with a full retail price of $799.99.

For those unfamiliar with the LG V60 ThinQ 5G, it has a 6.8-inch full HD+ OLED screen with the Dual Screen accessory offered for free by LG. The rear-facing cameras is a 64 MP unit that can also record 8K video. Power comes from a 5000 mAh internal battery, and the SoC is Qualcomm's burly new Snapdragon 865.