LG it is ready to jump back into the limelight with the release of its latest flagship mobile device, the V60 ThinQ 5G. As you'd expect from a flagship Android smartphone release in 2020, the V60 ThinQ 5G is powered by Qualcomm's new Snapdragon 865 SoC which is mandatorily paired with the Snapdragon X55 5G modem.

The V60 ThinQ 5G follows the trend of larger displays for flagship smartphones, and enters the fray with a 6.8-inch FHD+ (2460x1080) P-OLED FullVision panel. The display features a 20.5:1 aspect ratio and incorporates an in-display fingerprint reader. There's also a punch-hole cutout for the 10MP selfie camera at the top of the display.

But LG doesn't stop there; it also offers a Dual Screen accessory that provides an additional 6.8-inch FHD+ display to effectively double your working screen real estate. This is LG's current answer to the trendy new folding smartphones, but there are no concerns here with unsightly display creases or hinges that are prone to damage. The LG Dual Display also features a 2.1-inch Cover Display (monochrome) that provides glanceable information when the phone is folded closed that times out after 10 seconds to preserve battery life.

The aforementioned Snapdragon 865 is paired with 8GB of RAM and 128GB of internal storage, however, a microSD slot is included to boost storage capacity to a maximum of 2TB. Powering the V60 ThinQ 5G is a relatively beefy 5,000 mAh battery with Qualcomm Quick Charge 4.0+ support. It should provide all-day battery life for most users, but keep in mind that if you use the Dual Screen accessory, it will be drawing from the smartphone’s power source as well, limiting your runtimes. The Dual Screen case doesn't have its own power source. 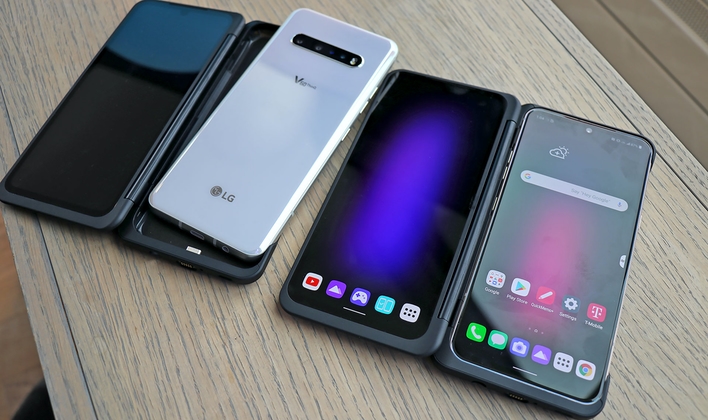 The V60 ThinQ V60 features two cameras on the back: an f/1.8 standard-angle 64MP sensor with a 78-degree field of view and an f/1.9 wide-angle 13MP sensor with a 117-degree field of view. Those two cameras are joined by a 3D depth of field sensor for enhancing portrait photos and 3D photography. The Snapdragon 865 SoC also allows the V60 ThinQ 5G to record video at up to 8K resolution, which is something that Samsung touted at the introduction of its Galaxy S20 family of smartphones (4K video can also be shot at 60 fps). 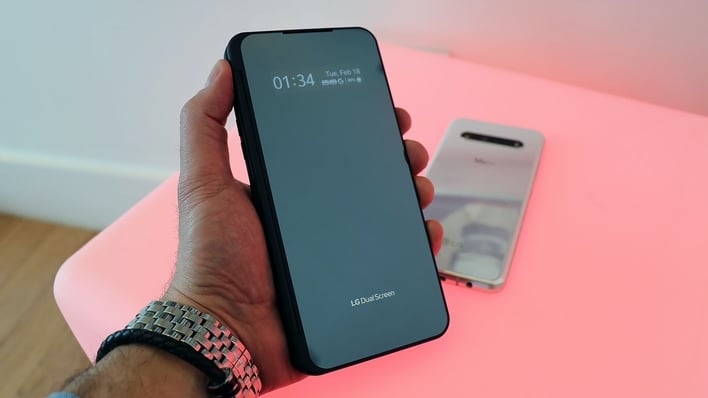 LG has been known for its attention to detail when it comes to the audio subsystem in its smartphones, and the V60 ThinQ is no exception. It provides a 32-bit Hi-Fi Quad DAC, stereo speakers firing across both sides of the device, and LG's AI-backed 3D Sound Engine. There are also four microphones located on the device (top, bottom, left-hand side, back) to enable 3D audio recording and to add voice bokeh effects. 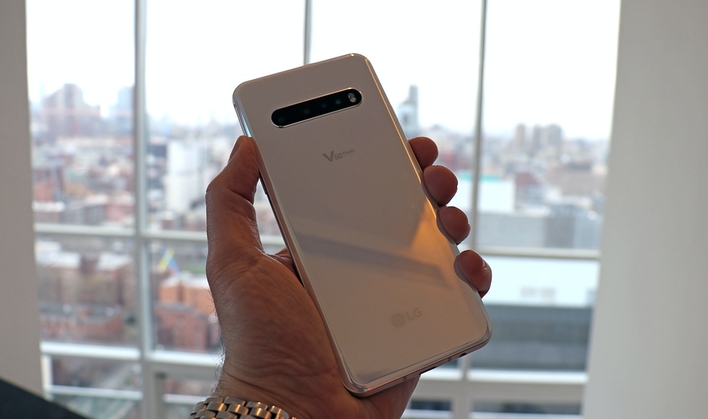 On the connectivity front, all bases are covered with Wi-Fi 6, Bluetooth 5.1, 4G LTE, and 5G connectivity. Unlike some other 5G smartphones that have been announced, the V60 ThinQ supports both sub-6GHz and mmWave spectrum to give customers the best of both worlds when it comes to accessing next-generation 5G networks. 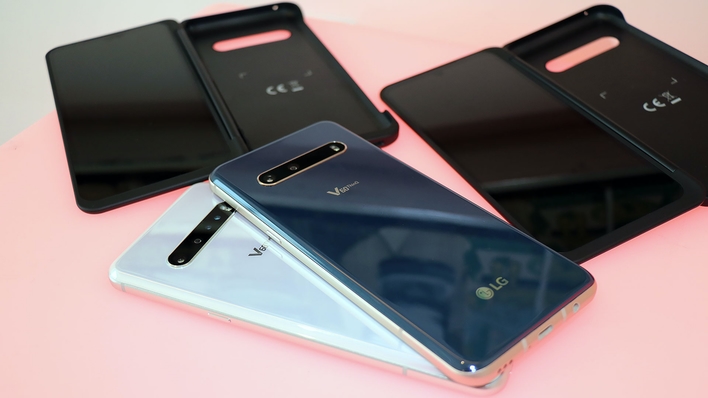 As we would expect from most smartphones launching in 2020 -- with the exception, inexplicably, of the Motorola Razr -- the V60 ThinQ 5G is running Android 10 out of the box.

LG says that the V60 ThinQ 5G will be launching at AT&T, Verizon, T-Mobile and U.S. Cellular "in the coming weeks". Pricing and any bundle offers will be announced closer to launch, but we imagine that pricing will undercut the Samsung Galaxy S20 family.