LG Display has some big plans for its transparent OLED technology, and it extends beyond using it only on automatic sliding doors, as the company touted earlier this month. The display maker wants its see-through OLED screens to permeate multiple facets of everyday living, from sushi bars and other restaurants, to even your bedroom. Er, I mean your smart bedroom.
"LG Display, the world’s leading innovator of display technologies, announced today brand-new Transparent OLED applications to be showcased at the upcoming all-digital CES 2021. The company has applied its cutting-edge transparent OLED displays to objects and situations that people encounter on a daily basis, thereby presenting an upgraded lifestyle of the future," LG Display says.
As shown in the image up top, one of those applications is a so-called restaurant zone. LG Display's demonstration will focus on a sushi bar outfitted with a 55-inch version of its transparent OLED display, with menu items and pricing shown on the screen. The person dining at the bar will also be able to see the chef and/or waitstaff behind the display.
"As guests wait for their order, they can watch a movie or TV program, while at the same time viewing the chef preparing their food on the other side of the display. This innovative product naturally stands out more in the contactless era as it can not only act as a partition but also serve up some fun," LG Display explains.
Even the Jetsons never had anything like this, just flying cars and robot maids. Oh, and lots of sprockets, courtesy of Spacely Space Sprockets, Inc.
It's not just restaurants and bars that LG Display is eyeballing, however. The display maker envisions this finding its way into smart bedrooms. This will be demonstrated at CES 2021 as well—LG Display says it will showcase a frame that can be moved to the foot of a bed, and with a push of a button, the transparent display rises up. 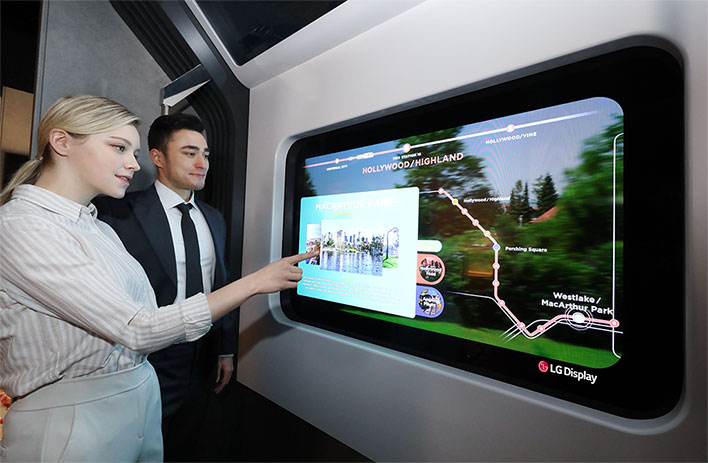 In addition, LG Display says its transparent OLED tech can be applied to a subway train in a metro zone. The see-through screens would replace traditional glass windows, so passengers can still take in the scenery outside while also having easy access to information like subway line maps, weather, and other news, as shown above.

This sounds hyper ambitious, given that even regular OLED display technology is not exactly cheap (though pricing is finally starting to come down). I could envision this being applied to some niche situations in the relatively near future, but widespread adoption is unlikely. But hey, anything is possible, right?