When most people talk about cutting the cord, they're referring to dumping to their traditional cable or satellite TV service in favor of streaming platforms, such as Netflix, Hulu, and YouTube TV (to name a few options). LG, however, is cutting the cord in a different way—its Signature OLED M (model M3) TV announced at CES says goodbye to cables dangling from the actual display unit for a wireless form factor.
This is kind of playing fast and loose with the "wireless" moniker and for a couple of reasons. For one, the M3 still needs to be tethered to an electrical outlet, unlike Displace's battery-powered 4K OLED TV we wrote about a few weeks ago. And secondly, the other cables aren't so much gone as they are relocated to a separate 'Zero Connect' box.
Still, we see the appeal of what LG is offering, which is a cleaner setup and an ultra-thin panel. Those traits come by way of completely removing (relocating) the inputs—the HDMI ports for plugging in set-top boxes and game consoles like the PlayStation 5 and Xbox Series X reside on the Zero Connect box. The box then sends both audio and video signals to the TV wirelessly. It also responds to voice commands. 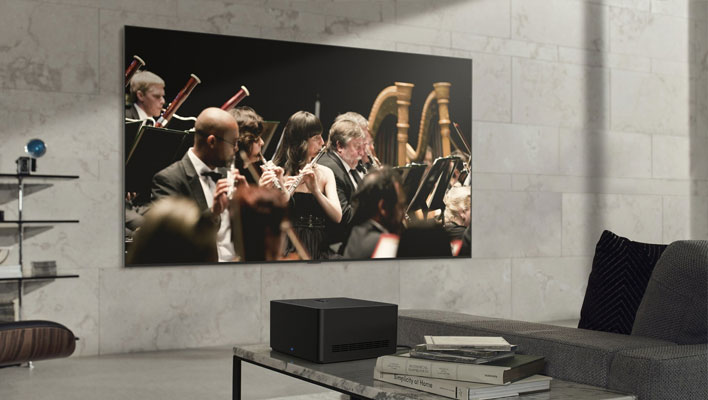 LG is also trumpeting a special algorithm designed to "instantly" identify the best transmission path to reduce or avoid interference hiccups, like when a person walks in front of the TV (rude!) or a pet meanders by (what are you going to do?). When those things happens, it switches paths accordingly, LG says.
As for the display itself, the M3 is a massive 97-inch unit with an OLED screen, 4K resolution, and 120Hz refresh rate. Other details are not yet known, such as the brightness level. It's worth noting, however, that LG has been a champion of OLED TVs with its well-received C-series and G-series models, which are especially sought after by gamers.
We'll have to wait and see how the 97-inch M3 compares to LG's other models. Same goes for pricing (undoubtedly this will cost a mint) and availability.