LG is bolstering its lineup of big screen TVs with new models featuring Quantum Dot NanoCell technology and mini LEDs, aimed at the premium TV segment. Sizes start at 65 inches and go up from there. Can these new sets compete with OLED, though? That remains to be seen (literally), but the specifications are certainly promising.
The big deal here is the use of mini LEDs. These are smaller than traditional LEDs that are used to light up LCD screens, allowing for brighter images and potentially more accurate colors, depending on the specific TV model and other technologies at play.
"Certified by international product testing agency Intertek for providing 100 percent color volume and color consistency, LG QNED Mini LED TVs also eliminate color distortion across a wide viewing angle, ensuring everyone in the room can enjoy the ultimate in LCD picture quality," LG says.
Good stuff, though it is important to note that mini LEDs are different from micro LED technology. It is the latter that comes with the promise of truly competing with and perhaps even surpassing OLED in virtually every way—better image quality, brighter content, and no risk of permanently burning images into the screen. 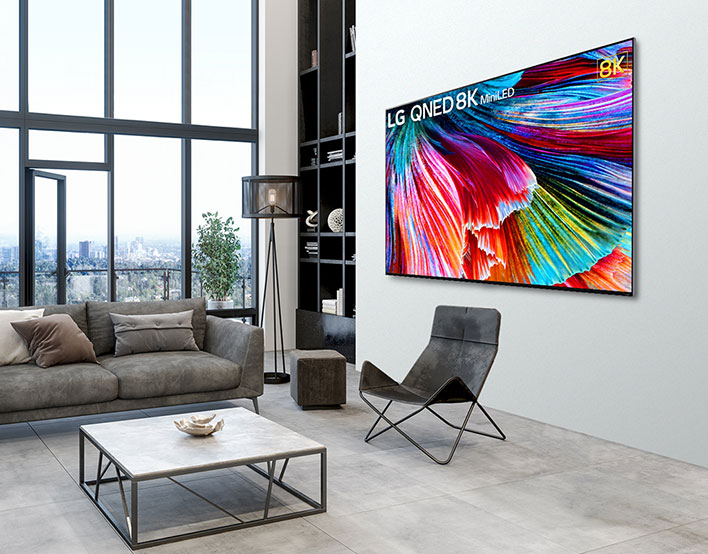 Still, mini LED technology is promising, and is represented in this new lineup. The big dog of the bunch is an 86-inch model with an 8K resolution (model 86QNED99UPA). It is outfitted with a staggering 30,000 mini LED lights that have been arranged to create around 2,500 local dimming zones. According to LG, this allows it to deliver a contrast ratio that is 10 times better than a typical LCD TV.
LG also plans to offer 75-inch and 65-inch models among its QNED99 line of 8K resolution TVs, along with an 8K QNED95 series and 4K QNED90 models. None of them are particularly cheap. While information is rather sparse on the QNED95 lineup, here's how pricing works out for the other models...
All of these support HDR content and have baked in smart features. These also all have a fast 120Hz native refresh rate, which is great for fast action content and gaming. As it pertains to the latter, LG has been one of the friendlier display makers when it comes to catering to gamers. As such, the 4K models are all FreeSync Premium displays.
Look for the new lineup to arrive in the United States in July, followed by other regions "in the weeks ahead." At that point, we'll be curious to see how these compare to OLED. Our guess is they won't quite match the overall image quality of a OLED screen, but if they can come close for less money, they could be popular options (especially if street pricing ends up south of the MSRPs, as sometimes happens).
This also means there could be some intriguing discounts old slightly older models during Black Friday and Cyber Monday, so stay tuned for that.