Lenovo is rolling out its smallest workstation to date, though don’t be fooled by the diminutive size of its latest iteration. The new ThinkStation P360 Ultra crams some seriously impressive hardware into a chassis that is less than 4 liters in volume, or around half the size of traditional small form factor (SFF) desktop workstations, including the ThinkStation P350 that it replaces. It’s also considerably more powerful than the previous model.
At its core is an Intel W680 Alder Lake foundation, with 12th Gen Core i3, i5, i7, and i9 processor options culminating in 16 cores (8 P-cores and 8 E-cores) at up to 5.2GHz in a 125W package—that’s a first for Lenovo.
This is flanked by up to an NVIDIA RTX A5000 mobile GPU based on Ampere, packing 6,144 CUDA cores, 48 RT cores, 192 Tensor cores, and 16GB of GDDR6 tied to a 256-bit memory bus. It’s essentially a GeForce RTX 3080 mobile GPU in a professional package. 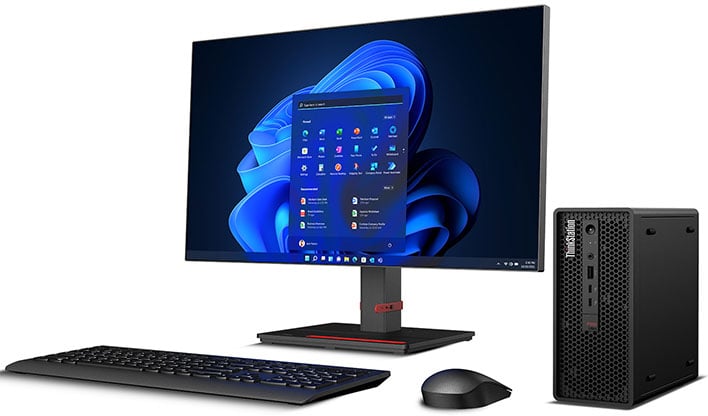 So there’s your one-two punch at the higher end of the configuration spectrum. Lenovo also made room for four SO-DIMM slots with two on each side of the motherboard, to install up to 128GB of DDR5-4000 memory. This two-DIMMs-per-channel arrangement is someone unique in the SFF workstation space.
On the storage front, a pair of M.2 slots each support up to 4TB of SSD storage for a total of 8TB with RAID 0/1 support, and there’s also a 2.5-inch SATA bay that supports up to a 1TB HDD.
Connectivity options include a front-mounted USB 3.2 Gen 2 Type-A port, two Thunderbolt 4 ports (USB 3.2 Gen 2 Type-C), and a 3.5mm audio combo jack. Then on the rear, users will find an additional four USB 3.2 Gen 2 Type-A ports, three DisplayPort outputs, and dual NICs (2.5GbE and 1GbE). And for wireless connectivity, Lenovo offers Wi-Fi 6 + Bluetooth 5.0 and Wi-Fi 6E + Bluetooth 5.2 options.
To support all this hardware goodness, Lenovo said it worked closely with NVIDIA to develop an innovative chassis that could both house and sufficiently cool the RTX A5000. It also worked with Intel to design a dual-sided motherboard to increase airflow.
The motherboard sits in the middle of the enclosure, which then allows air to flow on both sides. Multiple blowers are in place to expel hot air, including one that sits atop the M.2 drives. 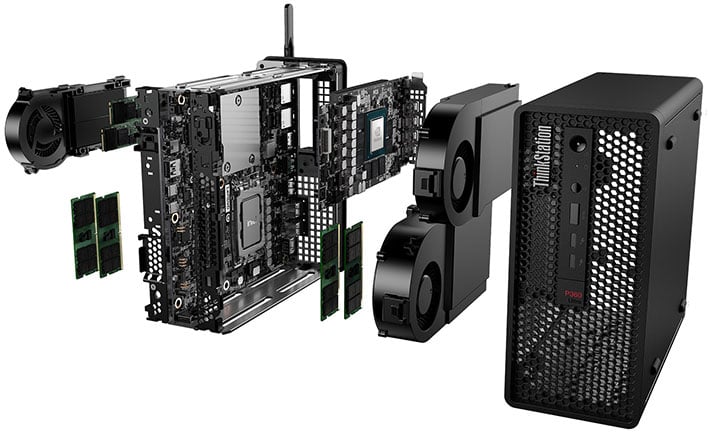 “We are revolutionizing the market with a new desktop workstation that is purpose-built to deliver impressive performance in a space-saving form factor that our customers need,” said Rob Herman, Vice President, Workstation and Client AI Business Unit, Lenovo. “The ThinkStation P360 Ultra is one of the most versatile workstations available given its ability to effortlessly tackle today’s most demanding workflows across industries, whether it’s being used by individual professionals or as an embedded technology within an OEM solution.”
We’d be curious to just how capable the cooling arrangement is on a beefier configuration, as well as what the noise trade-off might be. If we get a chance to review one, that’s certainly something we’ll look at.
In the meantime, buyers will be able to pick up a ThinkStation P360 Ultra later this month starting at $1,299.