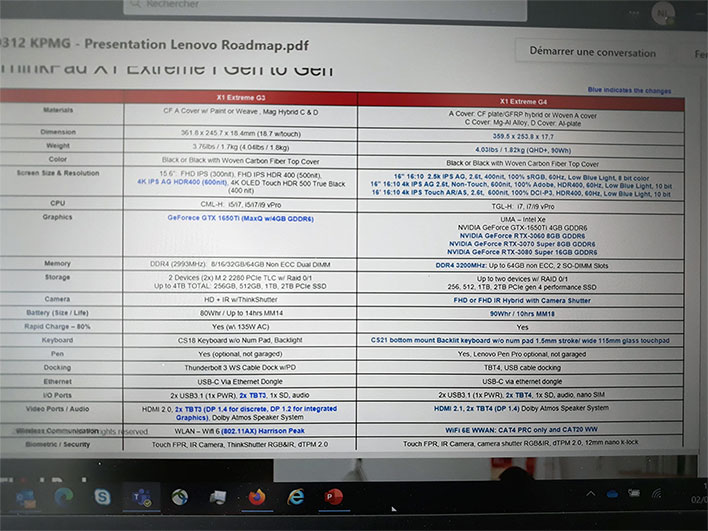 According to the leaked roadmap, the upgraded ThinkPad is getting a bump in size to a 16-inch display, and will weigh slightly more at a hair over 4 pounds. Lenovo will be refreshing it with Intel's latest generation Tiger Lake-H processors with Core i7 and Core i9 options (as well as vPro), which can be paired with up to 64GB of DDR4-3200 RAM and up to 2TB of SSD storage, with support for RAID 0 configurations.
On the graphics side, there are several GPUs listed...
This is the first we have seen of the unannounced GPUs, so there aren't really any leaked specifications to cite. Lenovo's roadmap does not reveal a whole lot in that regard either, though it did at least outline the memory allotment—the GeForce RTX 3080 Super will have 16GB of GDDR6 memory and the GeForce RTX 3070 Super will have 8GB of GDDR6 memory, if the slide is accurate.
As points of reference, here are the specs of the non-Super models in mobile form...
Speeds and performance vary, as NVIDIA is letting OEM partners configure different power profiles for each GPU, with optional support for Dynamic Boost as well. And on the GeForce RTX 3080 model, there are both 8GB and 16GB GDDR6 variants.
The addition of Super models gives NVIDIA's hardware partners a wider range of GPUs at the high end. It will be interesting to see how the specs turn out, as well as what price points these upcoming GPUs models end up hitting in the laptop space. Stay tuned!