Little by little, NVIDIA has been fleshing out its GeForce RTX 30 series on the desktop, even if the cards are rarely in stock. Now standing four SKUs tall, you can bet NVIDIA is not finished adding to the pile. Less expensive Ampere options are on the horizon (currently the cheapest card is the GeForce RTX 3060 Ti, priced at $399), and adding to the deluge of leaks, Lenovo has basically confirmed three more unannounced cards.
Before we get to those, let's talk about the current lineup. NVIDIA released the GeForce RTX 3080 on September 17, with a price set at $699. Then a week later on September 24, it released the GeForce RTX 3090 for $1,499. The GeForce RTX 3070 would follow a month later, debuting for $499 on October 29, then came the GeForce RTX 3060 Ti earlier this month on December 2.
So that is where things stand—if you want to buy an Ampere card, you are looking at spending between $399 and $1,499, based on MSRP pricing (the cards cost quite a bit more on the second-hand market since demand is outstripping supply at the moment).
Looking ahead, more cards are coming, and Lenovo revealed some specific models on a support page for an upcoming Legion R5 28IMB05 desktop. Take a look... 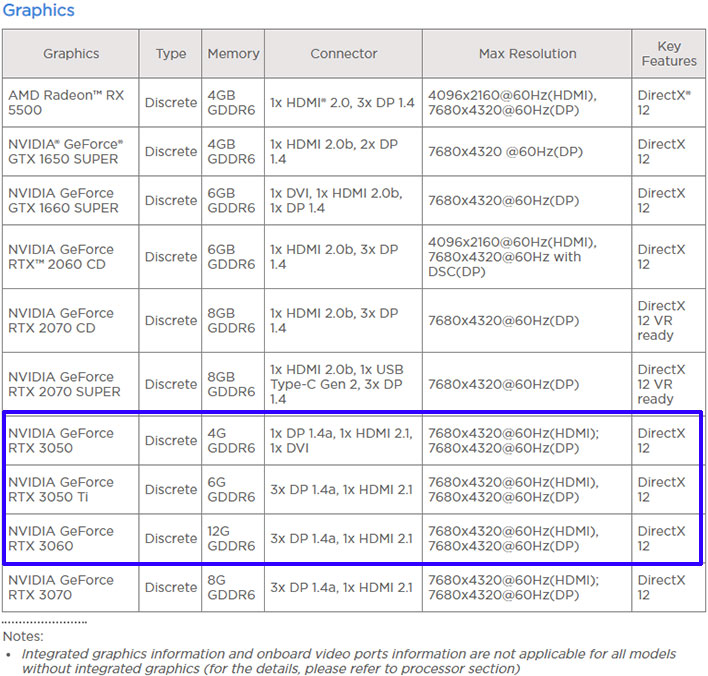