As Samsung Unpacked 2022 approaches, leaks surrounding the tech giant's new toys continue to pour in. Samsung is expected to announce new versions of its foldable devices, a new Galaxy Watch, and an array of accessories for all of its devices at its annual event.

Samsung recently announced the date for its upcoming Samsung Unpacked event, which will be held on August 10, at 9 a.m. ET. The event is expected to reveal several updates to Samsung's lineup of devices, such as the popular Galaxy Z Fold and Flip. The tech giant said that it shipped nearly 10 million foldable smartphones last year, a huge jump from 2020. But some fresh leaks about these foldable devices has the internet abuzz at the moment.

Leaker SnoopyTech tweeted recently about the upcoming foldables, purportedly revealing some of the specs. The claim states the Galaxy Z Fold4 will ship with 12GB of RAM, which will be paired with either 256GB or 512GB of storage. This leaves out the lower end 128GB and the higher end 1TB offerings, but either are still on the table until Samsung says otherwise. The more compact Flip4 is rumored to have 8GB of RAM, with storage options of 128GB, 256GB, and 512GB. 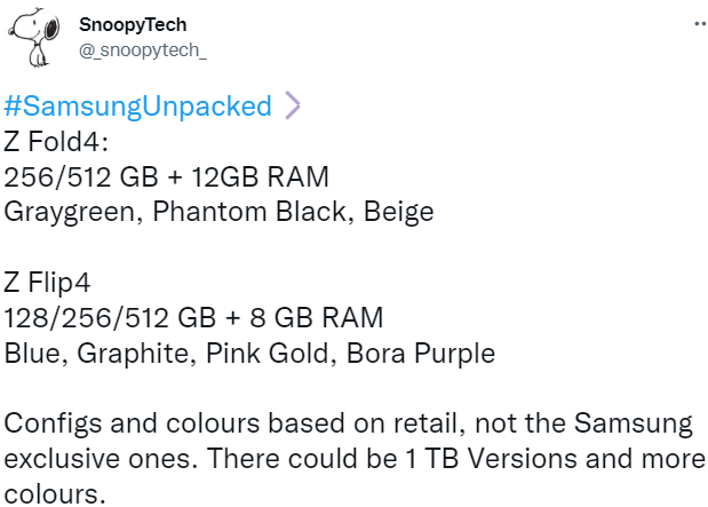 As far as color options go, the Fold4 is reportedly coming in Graygreen, Phantom Black, and Beige finishes, with the previously reported Red version possibly only being available through Samsung. The Flip4 is rumored to be coming with options of Blue, Graphite, Pink Gold, and Bora Purple.

Pricing information is a bit murkier. Initially it was rumored that the foldable devices would be priced lower than their predecessors. However, some now believe that the Flip4 might actually be a bit more expensive this go round. So, if you are trying to manage your budget around buying one of these new foldable phones from Samsung, it might be best to set aside a little more coin than the previous gen.

If you are wanting to go ahead and reserve your spot for ordering one of the new foldable phones, the new Samsung Watch 5, or the updated Galaxy Buds, you can visit Samsung's reservation page and put in your info now. If you decide to reserve any of the new devices prior to the event, you can save up to $200.

With Samsung Unpacked just around the corner, we won't have to wait long to find out exactly what the new devices will be all about. If you are wanting to watch the event live, you can do so on Samsung.com. You can also keep up with any new rumors and all the news coming out of the event here on HotHardware.com.