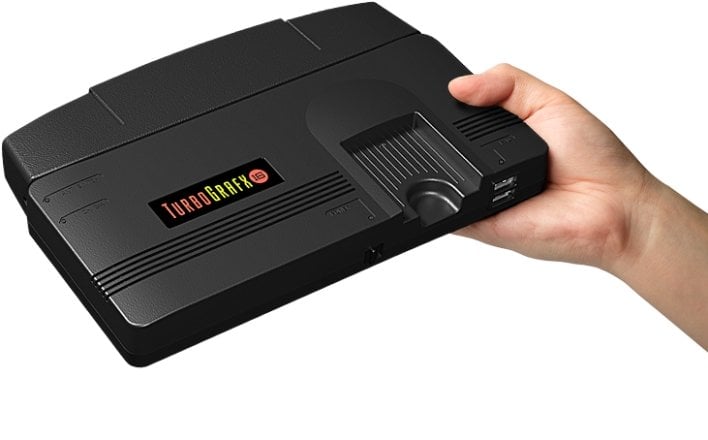 Gamers of a certain age were elated to hear that Konami would be releasing the TurboGrafx-16 Mini gaming console, which is designed (and operates) in the same vein as the Nintendo NES Classic Edition and Sony PlayStation Classic. Konami originally announced the retro console in June 2019, and the company revealed the very next month that the TurboGrafx-16 Mini would launch in March 2020.

Unfortunately, Konami will miss its March 19th launch date, and it doesn't take a rocket scientist to figure out what the culprit was: the coronavirus. The company issued a statement indicating that it has encountered an "unavoidable suspension" at its manufacturing and shipping facilities that will delay the launch until further notice.

"We deeply apologize to our customers for the significant inconvenience, and we humbly ask for your understanding and patience while we keep our close attention on the situation," the company writes. "We are investing all of our efforts to deliver the PC Engine Core Grafx mini as soon as possible, and will provide further details on the deliver timing once confirmed."

The following English language TurboGrafx-16 games will be preinstalled on the console:

And the following PC engine games (Japanese originals) are loaded up:

At this point, we don't have any idea when Konami will launch the TurboGrafx-16, but we'll be sure to give you an update as soon as we hear anything. And it's completely understandable and expected that Konami would have to take this step, even if it's disappointing to customers. We've already seen the Mobile World Congress, Facebook F8 Conference, GDC, and numerous other events canceled due to the coronavirus. And it's highly likely that the upcoming next-generation Xbox Series X and PlayStation 5 consoles will see their introductions delayed as well -- both are "scheduled" to launch during the Holiday 2020 shopping season.