It was only around four and a half months ago when Kioxia debuted its CD7 series of cutting-edge SSDs for data centers, which entered the market as the industry's first PCIe 5.0 models to support the EDSFF E3.S (7.5mm) form factor. Now just a relatively short while later, Kioxia announced it sampling its second generation PCIe 5.0 SSDs for enterprise and data center customers, the CD8 series.
Kioxia's CD8 models ship in a 2.5-inch, 15mm Z-height form factor. As such, they fill need for faster PCIe 5.0 storage for enterprise and data center servers that have not yet transitioned to EDSFF, or perhaps those that are in the process of being switched over.
"Today, PCIe 4.0 SSDs are considered at the forefront in terms of delivering the highest levels of drive performance," commented Greg Wong, founder and principal analyst, Forward Insights. "Next generation PCIe 5.0 SSDs provide twice the level of performance, and will continue to propel the PCIe/NVMe SSD market—which is expected to grow at a CAGR of over 20 percent out to 2026."
Kioxia has outfitted the CD8 series BiCS flash triple-level cell (TLC) NAND flash memory chips, paired with an in-house proprietary controller and accompanying firmware. They're designed to the PCIe 5.0, Open Compute Project (OCP) data center NVMe SSD and NVMe 1.4 specifications. 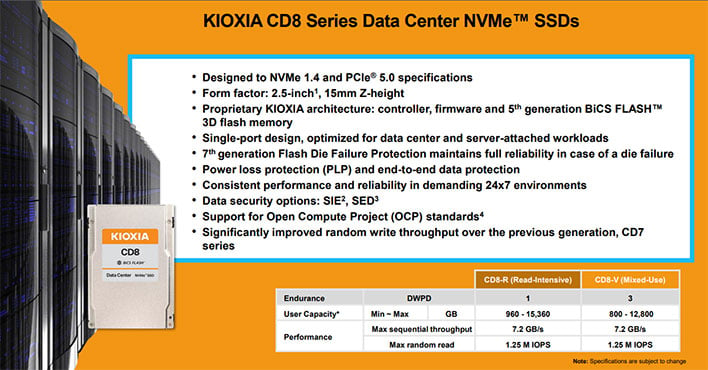 As for performance, we're looking at up to 7.2GB/s of sequential read throughput and 6GB/s of sequential write throughput. Random reads and writes check in at 1.25 million IOPS and 200,000 IOPS, respectively, the latter of which is a sizable 135 percent improvement over the previous generation.
Kioxia's offering two versions of the CD8, separated by endurance. One is the read-optimized CD8-R rated for one driver write per date and available in 960GB to 15.36TB capacities, and the other is the mixed-used CD8-V rated for three drive writes per day and available in 800 to 12.8TB capacities. The rated performance metrics are the same across both variants.

They're also available with multiple security options, including sanitize instant erase (SIE) and self-encrypted drive (SED) in a 2.5-inch form factor. There's no mention of pricing, though Kioxia says the CD8 series is available now for customer evaluation.