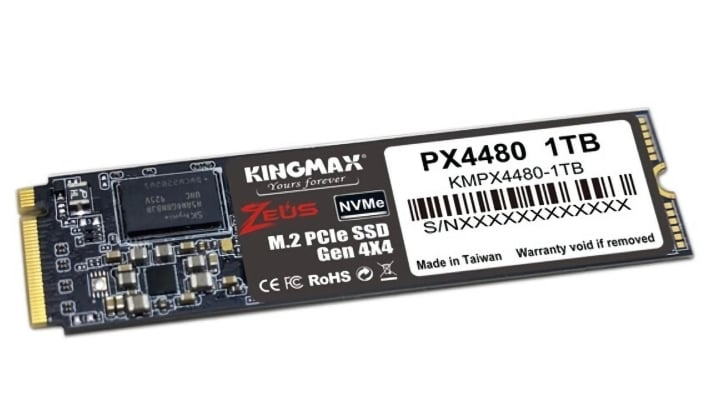 AMD's X570 platform has not only delivered us the highly capable Zen 2-based Ryzen 3000 processors -- which include the flagship 16-core/32-thread Ryzen 9 3950X -- but it has also ushered in the age of PCIe 4.0 SSDs for the consumer market. The newest of these blazing fast SSDs comes from KINGMAX, which has just introduced the PX4480.

The PX4480 is a NVMe M.2 SSD that is available in 500GB, 1TB, and 2TB capacities with performance that scales accordingly depending on capacity. The lowest capacity SSD has sequential read speeds that top out at a heady 5GB/sec, while writes are rated at an impressive 2.5GB/sec. Stepping up to the 1TB or 2TB capacities, however, maintains the 5GB/sec reads, but boosts sequential writes to 4.4GB/sec.

It's a similar story with random reads/writes, as the 500GB SSD manages 400K IOPS and 500K IOPS respectively. The 1TB and 2TB SSDs crank the read speeds to 600K IOPS while maintaining the 500K IOPS write classification. Power consumption for the 500GB, 1TB, and 2TB SSDs is rated at 6.3W, 6.5W and 7W respectively.

The PX4480 family of course features 3D NAND flash (we don't know where KINGMAX is sourcing it from, however), while it employs SLC caching, DRAM cache buffer, along with LDPC (low density parity check), ECC (error correction code), and E2E (End-to-End) Data Protection.

KINGMAX is backing the PX4480 with a 3-year warranty and guarantees endurance at up to 3,600 TBW (terabytes written) for the 2TB SSD. Unfortunately, KINGMAX isn't giving us any details right now on pricing or availability for these new SSDs, but we'll provide you with an update when that information is handed down to us.

We should also mention that while the KINGMAX PX4480 SSDs will absolutely destroy SATA and PCIe 3.0 SSDs in performance, they likely won't be compatible with Sony's upcoming PlayStation 5 game console. Sony has made it clear that while the PlayStation 5 can accept third-party PCIe 4.0 SSDs, they have to at least provide read performance of 5.5GB/sec to mesh with the console's internal SSD.