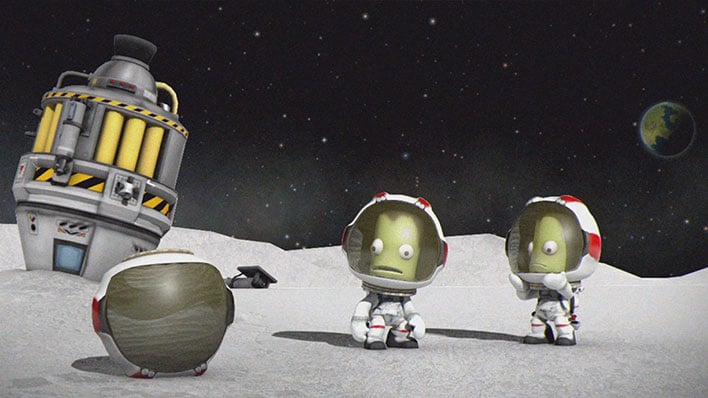 Ah nuts, Kerbal Space Program 2 will stay grounded this year, and instead will launch sometime in 2022. This adds to a string of delays for various reasons, one of which was attributed to the Coronavirus pandemic. But hey, at least it has not been cancelled (and 2022 is not far away, though it's not clear when exactly next year the game will launch).
Kerbal Space Program 2 has a bit of weird history that includes talent poaching and a cancelled contract. It is the sequel to Kerbal Space Program, which launched to PC in 2015, followed by releases to the Xbox One and PlayStation 4 a little over a year later. Had things gone to the initial plan for Kerbal Space Program 2, it would have launched in 2020. That obviously did not happen.
It's a little hard to follow, but the first game was developed by Squad, which sold the rights to Take-Two Interactive in 2017. Two years later, it was announced the sequel would be developed by Star Theory. But for whatever reason, Take Two opened a new studio this year to work on Space Kerbal Program 2, called Intercept Games. It is a story in and of itself, if you care to jump down the rabbit hole on Google.
What matters in the here now is that the game is being pushed to next year. Take-Two revealed as much in its latest earnings report, and Nate Simpson, creative director of Private Division (the game's publisher, which is owned by Take-Two), expanded on the reason why.
The short version is, "Space is indeed very hard." And the longer version is, the developers are dealing with an "immense technical and creative challenge," and they want to get it right.

"We’ve heard time and again from this community that quality is paramount, and we feel the same way. It’s not enough to deliver a bunch of new features—those features have to be woven together into a stable, polished whole. We’re creating a reliable foundation on which players and modders alike can build for another decade or more. That involves solving problems that have never been solved before, and that takes time," Simpson said.
Simpson also said that from his vantage point, the developers are making "huge leaps," and is very much "looking forward to soaking up all your reactions" when the game finally comes out.
"In the meantime, we’ll keep posting cool images here to give you a taste of what’s in store. We will also continue to release feature videos and developer diaries that go more in-depth on specific areas of the game, and hopefully those will help 2021 to go by a little faster," Simpson added.
Or put another way, stay tuned.