Is it too much to ask that we be allowed to buy the latest generation PC and console hardware at regular pricing, from first-party vendors? Under normal circumstances, paying full price is not a lofty expectation. But this past year has been anything but normal, and product shortages combined with determined scalpers have made purchasing certain hardware a nearly impossible task. Famed game designer John Carmack thinks he has the solution—manufacturer auctions.

Carmack posted his thoughts on Twitter, where he proposes a "transparent auction system" led by manufacturers for hard-to-buy items. You know, things like the newest generation graphics cards from AMD and NVIDIA, and the latest game consoles (Microsoft's Xbox Series X/S and Sony's PlayStation 5). You can toss AMD's Ryzen 5000 series desktop CPUs into the mix as well. 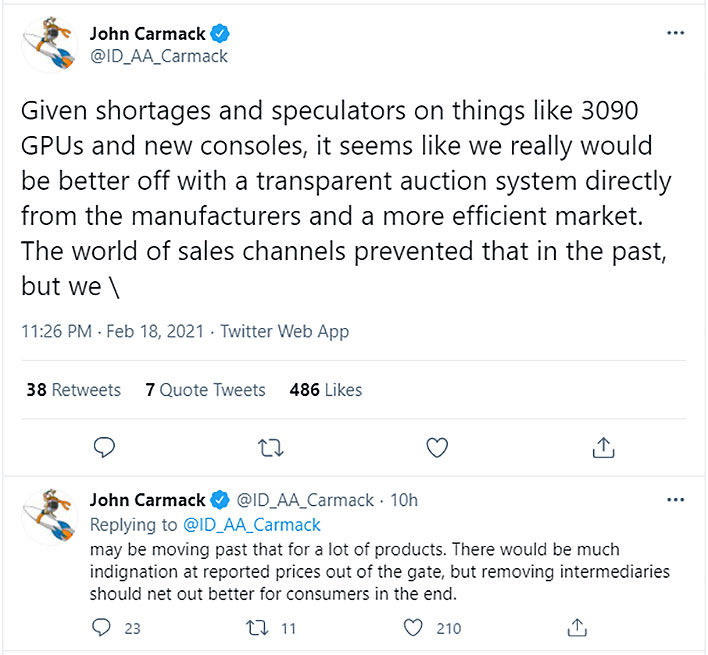 From Carmack's vantage point, we would be "better off" with manufacturer-led auctions of certain products. He says this was not really feasible in the past, but is now, and better for consumers, given the current situation.
"The world of sales channels prevent that in the past, but we may be moving past that for a lot of products. There would be much indignation at reported prices out of the gate, but removing intermediaries should net out better for consumers in the end," Carmack argues.

It is an interesting idea, though whether it would solve the problem, that's the big question. Chip shortages are impacting availability of the most desirable tech products, though there are exacerbating factors. Scripted bots have been a plague, allowing savvy scalpers to snipe inventories as soon as they become available, making it more difficult for consumers to buy products.
Recent months have also seen cryptocurrency prices rise, including Ethereum, which is typically mined with GPUs. This has prompted NVIDIA to launch a line of GPUs specifically for mining, and it has also taken the unique step of halving the hash rate of its upcoming GeForce RTX 3060 in an effort to get the card into the hands of actual gamers.
We're skeptical Carmack's proposal will result in any related action, and instead we'll probably just have to wait the current shortage out, as much as that stinks.