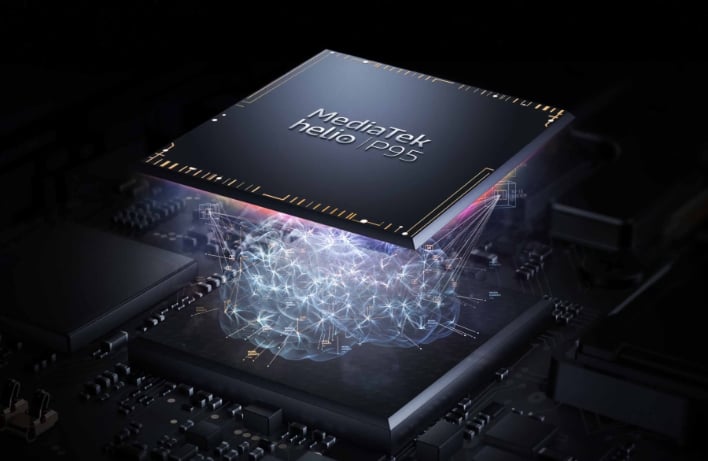 Cheating in synthetic benchmarks is an old practice; one that has been uncovered and litigated many times over through the years. Most recently, Huawei was caught gaming the system with a number of its smartphones (3DMark scores were inflated by as much as 47 percent), after which it apologized and ended the practice. Now it’s time for MediaTek to have its feet held to the fire over alleged benchmark cheating.

This latest reporting comes to us from AnandTech, which discovered that MediaTek is up to some funny business when it comes to the Helio P95 SoC, which is used in the European market Oppo Reno3 Pro smartphone. The Helio P95 is nearly identical to its predecessor, the Helio P90, but includes a roughly 10 percent improvement in AI performance and support for 64MP cameras. It is a mid-range SoC that features two high-performance 2.2GHz Cortex-A75 cores and six 2GHz Cortex-A55 efficiency cores.

However, in AnandTech’s testing, it was found that the Helio P95 was “punching quite above its weight” with respect to PCMark performance. In fact, the mid-range SoC was actually well into flagship SoC territory with respect to performance, which of course raised eyebrows. Even more telling was the fact that MediaTek’s new flagship Dimensity 1000 5G SoC was actually performing worse than the Helio P95.

After reaching out to the folks behind PCMark, UL, the magnitude of deception was uncovered. The “cheating” results showed improvements in scores in all of the individual benchmarks, with particular attention being given to the Writing 2.0 and Web Browsing 2.0 scores. Each saw massive performance increases, which helped the overall PCMark score increase by 30 percent compared to an Oppo Reno3 Pro without any cheat codes enabled.

Further digging found the offending code within the power_whitelist_cfg.xml file in the device firmware. Lurking within was a reference to “Sports Mode”, which can be applied to PCMark (among other synthetic benchmarks). AnandTech goes on to describe the purpose of Sports Mode, writing:

[It] fixes some DVFS characteristics of the SoC such as running the memory controller at the maximum frequency all the time. The scheduler is also being set up to being a lot more aggressive in its load tracking – meaning it’s easier for workloads to have the CPU cores ramp up in frequency faster and stay there for longer period of time.

But the entries in power_whitelist_cfg.xml weren’t just found in Oppo devices; they were also found in other smartphones that use MediaTek SoCs including vendors like Xiaomi, Vivo and Sony. So, this leads to the thought that this isn’t the smartphone OEMs that are behind the cheating racket; but MediaTek itself which is trying to game the [benchmark] system by integrating the code into the SoC Board Support Package.

For its part, MediaTek tried to explain away the publication’s finding when it was contacted for comment. “Many companies design devices to run on the highest possible performance levels when benchmarking tests are running in order to show the full capabilities of the chipset,” a representative for MediaTek revealed in a statement. “This reveals what the upper end of performance capabilities are on any given chipset.”

But as AnandTech points out, cheating in a system-level benchmark like PCMark that doesn’t just stress the SoC, but also other components in a smartphone, is not a real-world scenario. Whatever the case, it’s a sticky situation for MediaTek, and any smartphone OEM that has been caught up in this mess. Even more suspicious is that MediaTek has also recently decided to obfuscate references to the “Sports Mode” code in firmware, yet it’s still juicing benchmark scores with reckless abandon in further testing.

For a full report on MediaTek’s alleged cheating scandal, we encourage you to hit up the source link below.