We can't say which came first, the chicken or the egg. But in the realm of server hardware, next-generation motherboards based on Intel's unannounced X680 chipset are landing ahead of next-gen Xeon CPU hardware based on Alder Lake. We've seen at least two retail sites in Europe offering multiple Supermicro W680 motherboards.
Slowly but surely Alder Lake is extending its reach. Intel kicked off the Alder Lake party with a handful of 12th Gen Core "K/KF" desktop processors and its Z690 chipset for consumers, then expanded the lineup at CES with a bunch of non-K chips, mobile SKUs, and a few more chipsets. At this point, the Alder Lake stack is now comprised of CPU options that take full advantage of the hybrid architecture with both P-cores (Golden Cove) and E-core (Gracemont), and SKUs that use just P-cores. 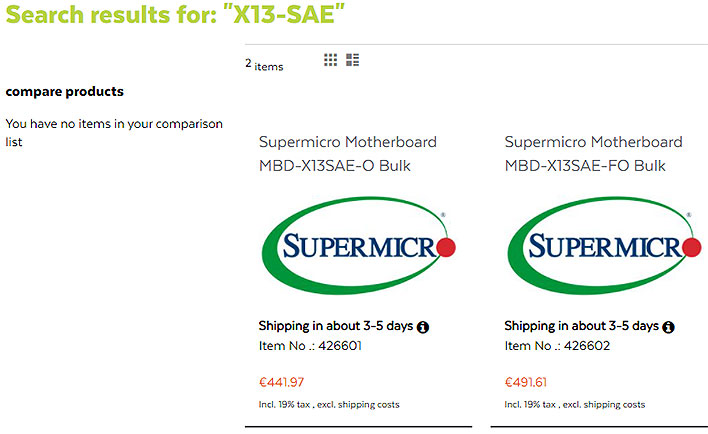 Bringing Alder Lake over to the server/workstation space is next, and apparently will be happening soon. We say this because there are now retail listings for at least three Supermicro boards based on Intel's W680 chipset. They include...
All three models feature Intel's LGA 1700 socket. Any desktop Alder Lake processor will fit, but these are intended for Intel's upcoming Xeon update. Past rumors suggest Intel's entry-level Xeon chips based on Alder Lake will be offered with up to 16 cores and a range of TDPs (35W, 65W, and 125W at the top end). And of course we can expect PCIe 5.0 and DDR5 memory support.
One of the big question marks is whether Intel's Alder Lake Xeon processors will support AVX-512. In the consumer space, Intel has directed its board partners to disable AVX-512, though MSI recently gave users the option of flipping it on with one of its Z690 motherboards. Market segmentation (between consumer and workstation products) could be one reason why Intel doesn't want it enabled on its Alder Lake-S platforms.
In any event, these retail listings suggest we'll have answers soon enough.