Intel's first Tiger Lake processors, which are based on the 10nm process node, aren't expected to debut until the latter half of 2020. However, that isn't stopping early engineering samples of the chips from making an appearance in popular benchmark software.

In this case, benchmark entries in both Geekbench 5 and SiSoftware were uncovered by TUM_APISAK. The Geekbench entry shows a 4-core/8-thread processor operating with a base clock of 1.19GHz. Given the "Y" designation, the low clock speed shouldn't be too surprising, as these are ultra-low power mobile processors. Intel's Y-Series typically have a TDP in the 9W range, even lower than the 15-25W U-Series. We're also expecting 12MB of L3 cache (up from 8MB), as we previously reported, and 1.25MB of L2 cache per core. 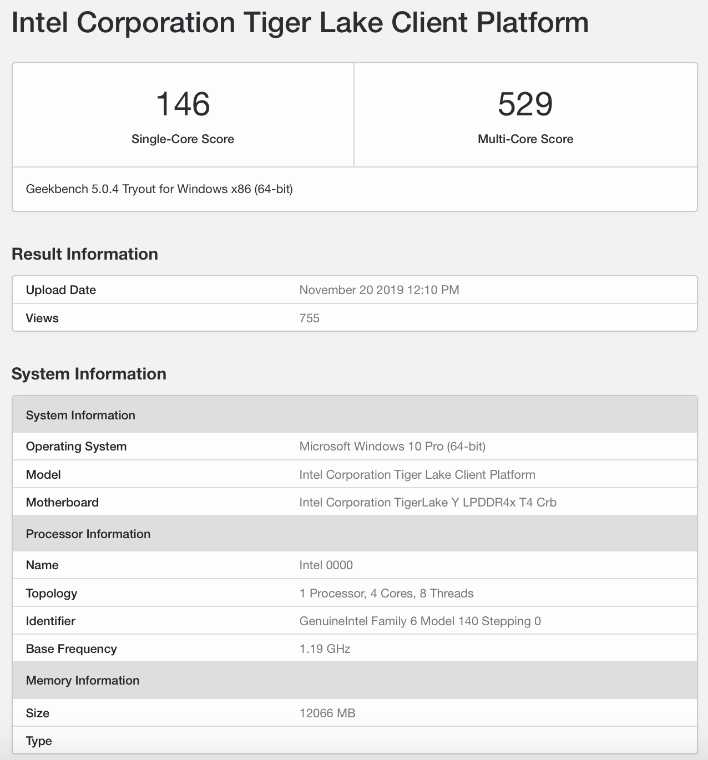 A SiSoftware entry also was revealed which specifically calls out the Gen12 IGP onboard with 96 execution units (total of 768 shaders). This is a relatively healthy increase over the Gen11 IGP found in Ice Lake (64 CUs). The IGP is also listed with a clock frequency of 1GHz, and support is confirmed for LPDDR4x memory.

While LPDDR4x is used in this particular Tiger Lake-Y processor, the platform also supports LPDDR5 memory (rated for up to 6,400Mbps). LPDDR5 could end up being a big boon for mobile applications, as it is up to 45 percent more power efficiency than LPDDR4x

In other Intel news, the company apologized earlier this week for lingering production shortages for its legacy 14nm processors.