Stop us if you heard this one already—over at Geekbench, performance results purporting to be from an unreleased Tiger Lake processor with Xe graphics have emerged and show...what's that, you have heard this before? Fair enough, but what makes this latest leak a little different (and interesting) is potentially seeing how the graphics portion compares with NVIDIA's discrete GeForce MX350 GPU.
As many of you reading this already know, Tiger Lake is the codename for Intel's next round of mobile processors, which will succeed Ice Lake. They are being built on an enhanced 10-nanometer manufacturing process (10nm+), and feature graphics based on the same Xe architecture that will underpin Intel's eventual discrete GPUs.
What we have in this latest leak is yet another look at the Core i7-1165G7. It is the same processor we wrote about yesterday, with regards to a benchmark cameo it made while hitching a ride inside a Lenovo ThinkPad laptop. It is a 4-core/8-thread processor with a 2.8GHz base clock and 4.7GHz boost clock, 12MB of L3 cache, and 5MB of L2 cache. On the graphics side, it wields 96 execution units (EUs).
Twitter user and leak investigator @_rogame spotted compared the recently leaked benchmark listing's OpenCL score with that of a Lenovo laptop configured with a GeForce MX350. Here's a look... 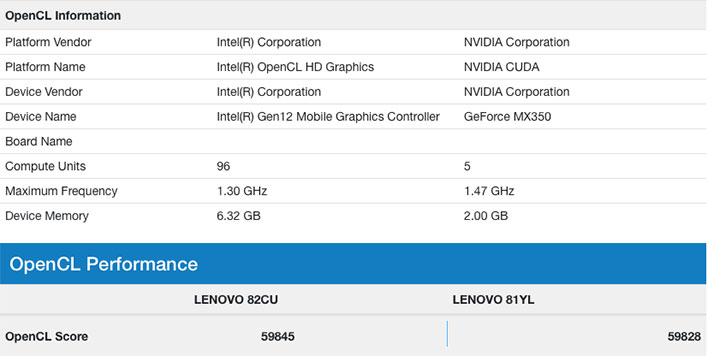 It is a virtual tie between the Xe graphics on the Core i7-1165G7 and the GeForce MX350 (the Tiger Lake part comes out just a hair head, at 59,845 versus 59,828). In addition, @_rogame says they have seen similar results in 3DMark.
That is "impressive," as the leaker comments, though bear in mind we are just looking at a single benchmark result. Still, from what we have seen up to this point, Tiger Lake is shaping up to at least be a good upgrade over Ice Lake, and potentially a very good one. Now if Intel will finally get around the launching the series, we'd be all set.