It is a safe bet that Intel will update its Next Unit of Computing (NUC) family with Tiger Lake at some point, as there have been a few leaks showcasing them already. The latest one is a supposed promotional document outlining some keys specifications and features. It also offers up a few renders showing certain aspects of the upcoming NUC, including the I/O port arrangement.
It would be a notable upgrade because Intel's 11th generation Core Tiger Lake processors bring its Xe graphics to the table. We recently spent the better part of two weeks testing a pre-production laptop with a Core i7-1185G7 processor inside, and found that "Tiger Lake delivers in spades, offering huge gains in both single and multithreaded workloads, as well as easily the fastest integrated laptop graphics solution currently, bar none."
Have the same underlying architecture wedged into a NUC is certainly intriguing. And incidentally, the same Core i7-1185G7 that impressed us so much is apparently bound for the NUC 11 Pro. 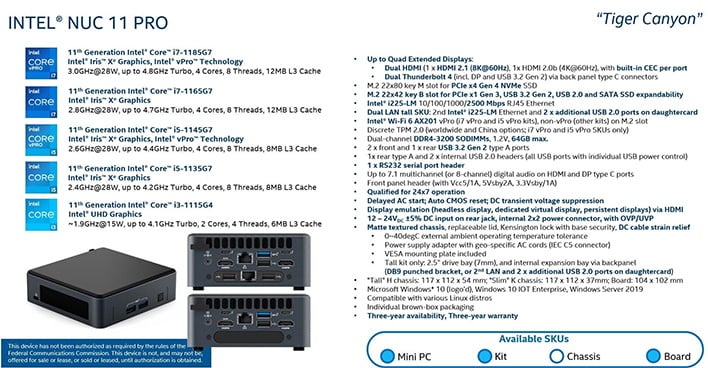 Also dubbed Tiger Canyon, the leaked promotional material indicates the Core i7-1185G7 will be one of several processor options. Other include the Core i7-1165G7, Core i5-1145G7, Core i5-1135G7, and Core i3-1115G4.
Is it real, though? At first glance, the port arrangement looks a little funky. When discussing this story internally, we wondered if it might be a Photoshop job, based in part on the Ethernet ports not lining up. However, they do not always stack up neatly. This is because they can be jammed onto separate boards inside the NUC. We can never be sure with leaks, but the design is at least plausible.