Intel has been busy as of late promoting and running its Xe HPG Scavenger Hunt, which will award 3,300 prizes with a total estimated value of $430K (including 300 Intel Arc Alchemist GPUs before they even launch). But there is another contest Intel has going that you may not have heard about yet, and it is awarding seven lucky finalists with all the hardware needed to build a PC (yes, even an elusive RTX 3070 GPU).

Intel's PC Mod Level-Up Challenge, also known as the TechMesh Challenge, presents PC builders of all skill levels the opportunity to take their wildest idea of a modded PC and turn it into a reality. So, if you have been sitting on a concept for an extreme PC mod but have not done it due to either finances or lack of available hardware, this could be the competition that makes it all possible.

Intel wants the challenge to be open to all skill levels, so don't be intimidated if this would be your first build. Judges will take into consideration the skill level of each participant as they go about deciding on the seven finalists. So even if you have never built a PC in the past, Intel wants to give you the same chance at winning as someone who has been modding PCs for years.


The challenge begins with participants presenting their vision of what the PC mod will be. Intel recommends that you explain the scope of your project through drawings, sketches, photographs or renders. This will allow judges to share in your vision and give them a better idea of exactly what you are intending to build.

Another suggestion is to describe how you will go about creating the mods and integrating them into your build. Of course, you will also want to let them know how you intend on using Intel's products and making them pop in your project. You could include something about the included Intel Core-i9 12900K that will be part of the hardware awarded to the finalists (see picture below for a full list of hardware). 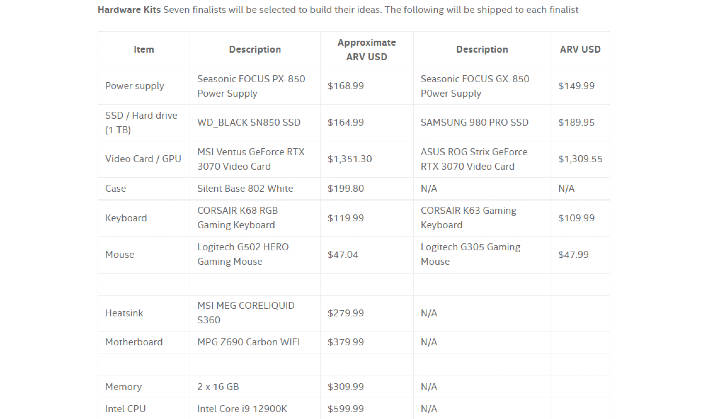 The theme of the challenge is "Future of Innovation", so this should be taken into consideration when you are coming up with your final design to be submitted. The rules do state that the mod design entered must not have been created earlier than October 1st, 2021. So, while you may have had the initial idea floating around in that big brain of yours for several years, taking the theme into consideration should ensure you stay within this guideline.

Once the judges determine the seven finalists, those competitors will be provided with all the hardware needed to build it, case included. The only thing you will need to supply will be your ingenuity, parts required for the mod, and your sweat (blood and tears optional). It is worth noting that if you are fortunate enough to be selected into the final seven, you will be required to submit five videos and ten photos that journal your PC build. You are also not allowed to seek out sponsorship for anything used in your build (in case any of you were already thinking about asking HotHardware for help).

You are required to submit your idea by November 26th and the finalists will be chosen by December 6th. The finalists will need to post their first video chronicling their build no later than January 10th, 2022. Those submissions will be judged using three criteria. The first is creativity and/or inspiration of the project. Second, technical skill/craftsmanship as in difficulty, technique, etc.  The third will be how you incorporate Intel into your build. So, keep all those criteria in mind as you dream up your idea for your initial submission. Be sure to check out all the rules and guidelines on Intel's PC Mod Level-Up Challenge webpage.

All the finalists will be able to keep all the hardware they receive, along with the final build. There will be three out of those seven chosen to receive a gift card ranging from $600-$1000 in value. Gift cards will be issued to the winners in their countries currency with a provided based where they live as well (the gift card will be hardware). This could go a long way in funding your next dream PC.

Intel is pulling out all the stops with its two competitions at the moment. The scavenger hunt awarding 300 people with a first generation Intel Arc GPU before they hit the market to the general public is insane in and of itself. The TechMesh Challenge adds to that hype by giving seven people the opportunity to build an incredible modded PC, and potentially be their first PC build ever. So don't sit around waiting on the GPU market to get back to "normal". Jump into these competitions and have a chance at winning some amazing prizes.