For all those who have been following Intel's Xe HPG Scavenger Hunt, it has been filled with a few days of some periodically checking to see if the second question of the contest has dropped yet. Well on Tuesday, Intel dropped a pretty big clue as to when contestants need to be on their toes for question number 2 and it is very soon!

The Xe HPG Scavenger Hunt opened up to contestants on October 27th and it runs until January 31, 2022. Many found that the list of prizes in the terms and conditions potentially hinted to what upcoming Intel Alchemist GPUs may cost. Then as the first question dropped it was a whirlwind of players trying to figure out the answer to the first question and had many making small groups to increase their odds of being in the top 300.

The contest requires players to wait on a question to be posted on the contest webpage and then search through various tweets by a select group of tweeters for a clue to the answer. The quicker you are to answer, the more points you will earn. Those points will place you on a leaderboard throughout the competition to let you know exactly where you stand against your competition as each of the ten questions are asked. And placement is important. The top 300 will receive one of the upcoming Intel Arc Alchemist GPUs, before they even release to the general public for sale. Also, don't worry if you get the answer incorrect. It is setup to only accept the correct answer, so feel free to try as many "educated" guesses as you want (there's no penalty for getting it wrong).

It is not as simple as it may seem, however. Intel wants the hunt to be a challenge, so it has said the clues will be cryptic in nature and not clear as day. So if you are looking for a question like, "What color shirt is Pat Gelsinger wearing in his latest tweet?" you will be sadly mistaken. For example, the first question left many scratching their heads as to where the clue even was. They knew it had to do with a bridge, but when they looked on Twitter there was nothing about a bridge among the tweets of those you need to follow. But that is why it is called a scavenger hunt. It is more about finding a few clues that will lead you to the treasure.


After the first question was revealed and some began finding the answer, it then left them wondering when the second question might drop. As with any contest of this nature, some players were constantly checking the contest page to see if that day was the one for question number 2. Then on Tuesday Intel decided to drop a huge clue as to when that second question will be revealed. 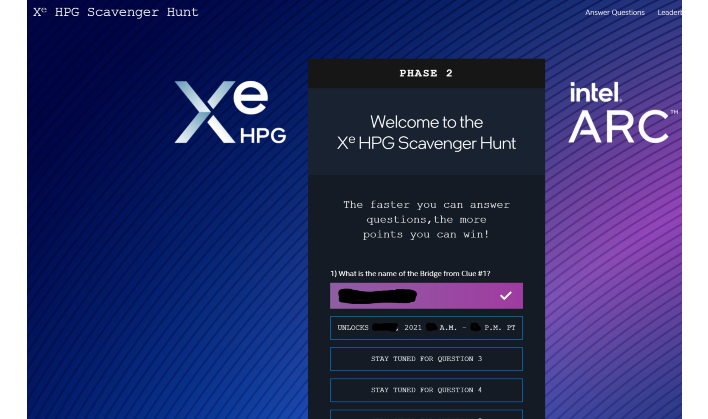 You probably noticed that the answer to question one is marked out, as well as the dates and times the second question will be dropped. We don't want to make it too easy for you. You can easily check for yourself by going to the contest website and creating an account, if you haven't already. Then join the hunt to possibly win one of 3,300 prizes. You can see the full list of prizes by clicking on the terms and conditions at the bottom of the main page. Then head on over to the "Answer Questions" page to find out when question 2 will be given (and try and answer question number 1 if you haven't already). As of right now there have been less than 800 entrants to get question one correct. That means you still stand a very good chance at securing a prize.

There is a good place to go if you want to seek out help with the scavenger hunt. Join Intel Insider's Discord and then go the Xe HPG Scavenger Hunt channel and join in on the conversation. While some may not be very helpful, others have proven to be more willing. Good luck scavengers and may the odds be forever in your favor!