At long last, Intel appears to be on the cusp of launching its first modern discrete graphics card for gaming based on its Xe architecture. In preparation for the launch, which Intel recently said is "right around the corner," the company is inviting 'Official Odssey Card' holders to register within Intel's Developer Zone website to score some free swag (a t-shirt and perhaps some other stuff).
I'm not an Odyssey card holder (aw nuts!), but from what I can tell, those cards were given out to attendees of different events, to be redeemed later. That day has come. The card itself is not the interesting part, though—it's the confirmation from Intel that its Xe-HPG graphics solution for gaming and enthusiasts is nearing release. 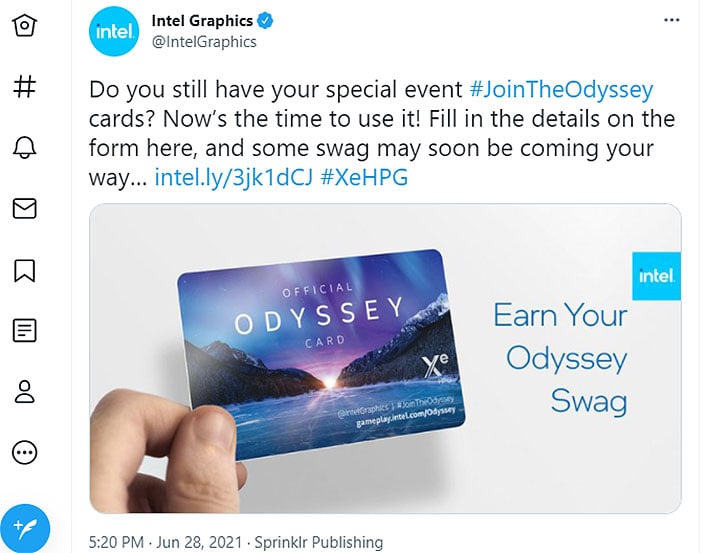 "Thank you for joining Intel on this Odyssey. We are soon heading toward a milestone moment, the pending release of the Xe-HPG microarchitecture from Intel," the company writes on a card redemption page.
"Some of you received an Odyssey card and were the first to engage with Intel on this journey. Now is the time to redeem this card, which is one in many steps we hope to formally take forward with you. We have a few required fields here to confirm you have received a card from us. As well if you agree to provide additional information, it will help us follow and recognize you for your commitment with Intel," the company continues.
Intel is pretty clear that its Xe-HPG graphics launch is imminent, but lest anyone need further evidence, they only need to turn to yesterday's Sapphire Rapids announcement. One of the slides in the accompanying presentation deck points Intel's DG2 card as now sampling to customers. Have a look... 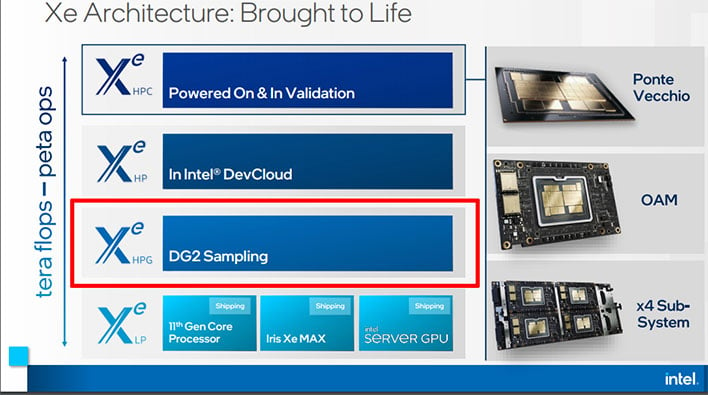 There are four main tiers for Intel's Xe graphics graphics, including Xe-LP, Xe-HPG, Xe-HP, and Xe-HPC. They are all interesting in their own right, but for gamers, the Xe-HPG is the big attention-grabber. It will manifest in Intel's upcoming DG2 graphics chips, and hopefully bring some additional competition to AMD and NVIDIA.
Recent rumors hint that Intel might focus on laptops first, with systems shipping with Intel CPUs and GPUs, followed sometime later by discrete DG2 graphics cards for desktop PCs. That roll out strategy has not been confirmed, though.
There will be different versions of DG2 as well. Intel documents suggest there will be at least five SKUs with between 96 and 512 execution units (768 to 4,096 shading units), and between 4GB and 16GB of GDDR6 memory tied to different bus widths (up to 256-bit).
As to performance, we obviously won't know how things shake out until DG2 actually arrives. However, leaks and rumors indicate that Intel's top-end DG2 solution will be roughly on par with NVIDIA's GeForce RTX 3070 Ti.
That would be an impressive feat for a brand new product, and Intel's first discrete GPU since Larrabee over a decade ago. Actual availability and pricing are other factors to consider, but if Intel can achieve that kind of performance right off the bat, it bodes well for the company, as well as gamers and enthusiasts.