Intel has just showcased its biggest NUC yet – the new NUC 13 Extreme Raptor Canyon desktop PC. As the generational part of the name indicates, this Extreme PC will leverage the new 13th Gen Intel Core Raptor Lake processors. However, the powerful Core i9 CPU choice isn’t what is really behind the size expansion here, instead it is the design choice to allow users to fit triple-fan GPUs that are up to three slots wide. 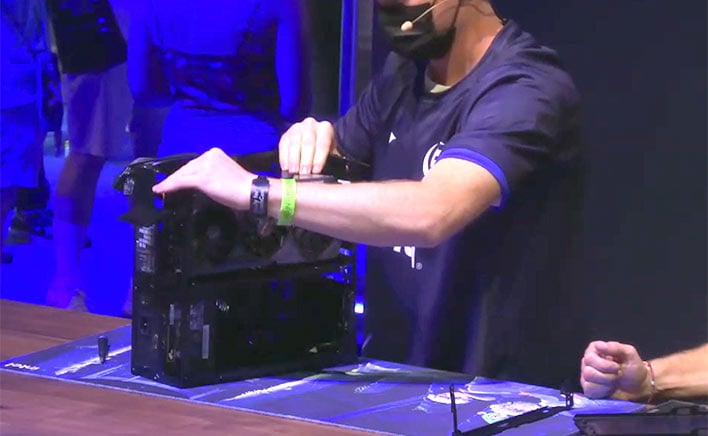 Intel’s Next Unit of Computing (NUC) philosophy began with diminutive designs enabled by advances in processor architectures and other trends in miniaturization. Recent generation NUCs, particularly the powerful Extreme designs, have been pushing the envelope as far as physical dimensions are concerned. The latest NUC 13 Extreme Raptor Canyon PC looks a lot like an SFF or Mini-ITX PC. It's roughly 14 liter chassis is certainly bigger than we would have expected a NUC to be inflated to: nearly 75% larger than the previous gen NUC Extreme. This new NUC is approaching the size class of a DIY Mini-ITX cases with decent GPU capacity; like the Cooler Master NR200 (which can fit a 330mm GPU), or the SilverStone Sugo 14 (which can fit a full-length 3-slot GPU). 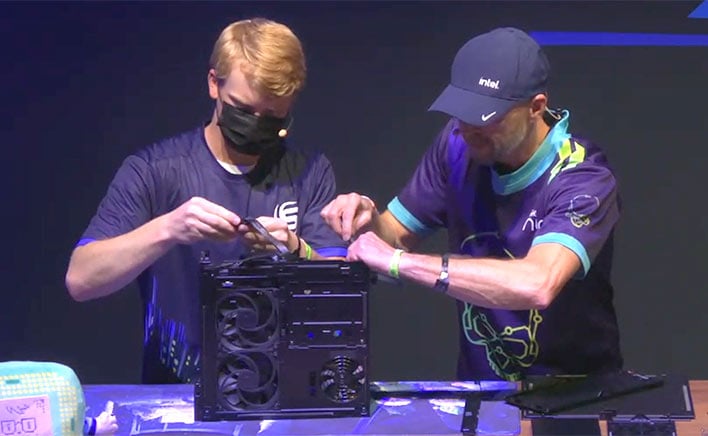 So, what do we know about the NUC 13 Extreme Raptor Canyon PC? Intel has yet to publish an official product page, but it was featured on the TwitchCon Day 3 stage, in a full live build. In the recorded Twitch video (NUC build begins at just over the 4-hour mark) you can see the metal chassis is extensively perforated for airflow. The inner space is a dual-chamber design, each section with its own 120mm fan for encouraging airflow. The video quality isn’t great, but we think we can confirm provision of six USB ports, a couple of video output ports, twin Ethernet ports, and some audio I/O. It is also likely the design features built-in wireless connectivity such as Wi-Fi and Bluetooth as standard.
The TwitchCon event was just an early tease for the new Intel Raptor Canyon NUC 13 Extreme. At the time of writing, there is no official word on when these PCs will be available online direct or via retailers. Also, we don’t have pricing. Nevertheless, we should expect these powerful and configurable Raptor Canyon NUC 13 Extreme computers to be sold in barebone and populated kit form by the end of 2022 or early next year.