As has been made abundantly clear, Intel has big plans in the discrete GPU space, with upcoming solutions for virtually every segment. Intel has teased its progress here and there, including a recent Twitter post, in which GPU boss Raja Koduri posted a video clip of Ponte Vecchio, a massive slice of silicon comprising the company's Xe-HPC chip.
Intel CEO Pat Gelsinger talked a little about this very part yesterday during the Intel Unleashed event. Following up on that, Koduri tipped his hat at Gelsinger on Twitter, saying the CEO's "infectious energy for technology is a great accelerant for our march onwards to bring this magic to a cloud near you." High praise from a bigwig himself.
As for the teaser video, a higher quality version can be found on YouTube, which we have embedded below...


Ponte Vecchio figures to be Intel's first exascale GPU, aimed squarely at the high performance computing (HPC) market. In other words, this is not the variant that will end up in consumer graphics cards for gaming (that would be Xe-HPG), but a bigger and more powerful part. It is built on a 7-nanometer EUV manufacturing process and packs over 100 billion transistors.
It's also rather larger, though despite its size, Intel points out that it was able to cram a peta-flop of compute power into a slice of silicon that can fit in the palm of a hand. 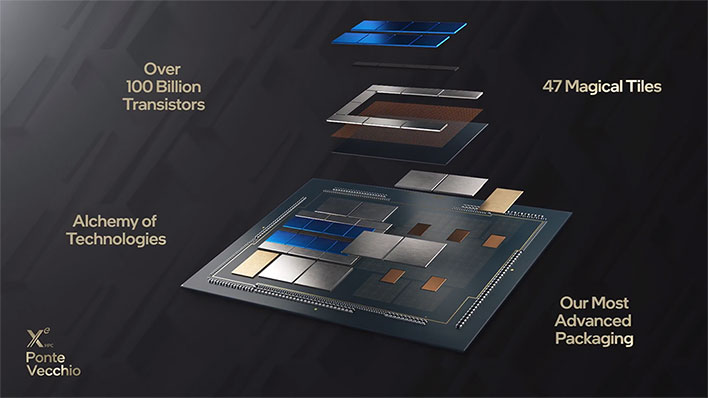 The size of the chip paves the way for 47 compute tiles, or "magical tiles," as Intel labels them. These will serve different purposes, all of which will aid a pair of GPU dies and eight HBM2 memory stacks (four for each GPU), all bumping elbows in a single package.

Ponte Vecchio will find its way into systems with upcoming Xeon processors (Sapphire Rapids) to handle advanced simulations and other intense workloads. One of those systems will be Aurora, the first exascale supercomputer, comprised of over 200 cabinets that leverage Cray's Slingshot high-performance scalable interconnect.
Also impressive is that Ponte Vecchio went from "idea to silicon in 2 years." As to where it is at in development, Intel says it has successfully powered on a Ponte Vecchio setup with oneAPI. That's good news, considering Aurora is supposed to be finished by the end of the year.