The next generation of Intel’s NUC made a brief cameo appearance at CES 2022. NUC PCs tend to cram much of the performance of a high-end desktop computer into a small form factor, and the Intel NUC 12 Extreme looks to continue that tradition.

Code-named Dragon Canyon, this NUC is the successor to Intel’s Beast Canyon product. The Beast Canyon featured an Intel desktop 11th generation Core I9 processor in a case about the size of a shoebox. It was compact, but could still fit a full-length graphics card.

Unlike the Beast Canyon model, though, the latest NUC has a full-sized LGA1700 CPU socket That means, in theory, that any 65W desktop-sized Alder Lake processor should work just fine. The NUC supports up to 64GB of DDR4-3200 RAM and will also have sockets for three PCIe Gen4 M.2 SSDs.

The desktop socket comes as no surprise. A photograph recently leaked (above) gives a closeup of the CPU LGA1700 CPU socket as well as the pair of DIMM sockets. With the brief presentation during Intel’s demo, it’s clear that the NUC will support 65W Intel Core i7 or Core i9 socketed processors. Cooling will be accomplished using a vapor chamber and fan. 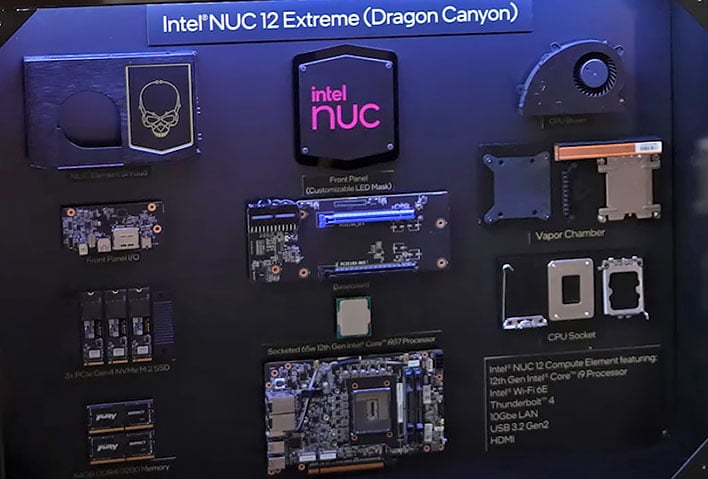 The Dragon Canyon Extreme is built around a Compute Element with the CPU, WiFi-6E chipset, and the major input/output ports and sockets. These include USB 3.2 Gen2, Thunderbolt 4, 10Gbe LAN, and HDMI. This is attached to a baseboard for connecting other components.

During the brief showcase of Dragon Canyon, Intel didn’t show the graphics card. So while we can’t say that we saw the Intel Arc Alchemist discrete graphics GPU for the NUC 12 Extreme Dragon Canyon, we do know from previous announcements that the chip maker plans to release just that.

An exact release date for the Dragon Canyon Extreme is still under wraps. Intel did confirm, though, that it will ship during the first quarter of 2022.