Alder Lake is barely out the door and Intel is already talking about a new flagship SKU on the horizon. That would be the Core i9-12900KS. Previously rumored to be coming, Intel left no doubt during its CES livestream, during which time it confirmed and briefly demonstrated the upcoming "KS" variant running an all-core 5.2GHz turbo frequency.

While Intel didn't say this, the Core i9-12900KS is essentially a binned version of the Core i9-12900K that is capable of hitting higher clocks. The "S" stands for "Special Edition," just as it did a few generations ago when Intel released the Core i9-9900KS, another binned slice of silicon that upped the ante over the regular "K" model with some faster clocks (in that case, faster base and single-core turbo).

Let's talk about the regular Core i9-12900K first, which we covered in detail as part of our Alder Lake performance review. It's a 16-core/24-thread chip comprised of eight P-cores and eight E-cores. The P-cores have a 3.2GHz base clock and 5.2GHz max turbo frequency, while the E-cores go from 2.4GHz to 3.9GHz.
Stout for sure, but the Core i9-12900KS takes things a step further. Not only can the upcoming 12th Gen Core part hit a 5.2GHz turbo frequency across all of its performance cores, it has a max 5.5GHz turbo frequency. Provided your cooling solution can keep up, anyway. 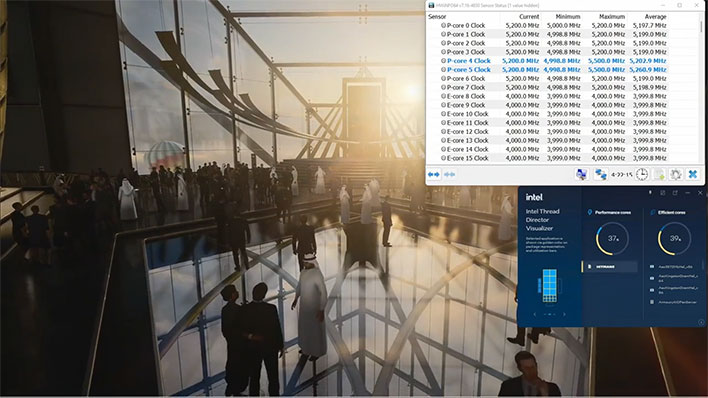 Intel did not showcase the chip hitting 5.5GHz during its livestream, but it did highlight the Core i9-12900KS running at its all-core 5.2GHz turbo frequency in a session of Hitman 3, as shown above with HWiNFO providing the clock speed monitoring. We also see the E-cores running at 4GHz, which is 100MHz higher than the regular Core i9-12900K. Good stuff.
It will be fun to watch the Core i9-12900KS duke it out with AMD's upcoming Ryzen 7 5800X3D with additional 3D V-cache bolted on. During AMD's own presentation, the company made the claim that the Ryzen 7 5800X3D is the "world's fastest gaming processor," and it provided a sample of benchmarks comparing it to the Core i9-12900K. Three of the six benchmarks it shared were listed as a tie, whither the other three favored AMD's chip by a small margin. We'll have to wait and see where the chips fall when both processors make their debut.
Speaking of which, it sounds like the Core i9-12900KS will be exclusive to Intel's OEM partners. If so, the only way to get one would be to buy a pre-built system. We'll have to wait and see, but fingers crossed it will be offered as a standalone chip too.