The laptop versions of Intel's Arc GPUs, at least the littlest ones, officially launched on March 30th. We haven't seen and evidence of laptops containing the cards on store shelves in our areas, but some enterprising folks in South Korea have discovered that local models of the Samsung Galaxy Book 2 Pro can be acquired with an Arc A350M GPU.


One of the people to put their hands on an Arc-equipped Samsung laptop is popular South Korean hardware review channel BullsLab. Last week, on Friday, that channel published a short review of the laptop focused on testing the performance of its Arc A350M graphics.


The results were not encouraging. Performance across the testing wasn't great, with Intel's little GPU struggling to match a mobile GeForce GTX 1650 similar to the release-day leak we saw before. In addition, the reviewer reported that they encountered graphics defects impacting playability in some games, and even a few titles—including Forza Horizon 5 and Call of Duty: Cold War—that wouldn't launch at all.


Monday, BullsLab posted a video on its second channel with new tests of the Arc 350M in the Galaxy Book 2 Pro. There's been a driver update, and that addressed some of the glitches, but that's not the real exciting part of the new video. Instead, the reviewers decided to try disabling Intel's Dynamic Tuning Technology (DTT).

DTT is a feature of Intel CPUs and GPUs that allows them to dynamically adjust clock rates to hit a pre-specified TDP target. In the case of the Galaxy Book 2 Pro, it seems like DTT was configured to keep the CPU and GPU together within a 30 to 35-watt envelope.


Turning DTT off allowed the CPU to draw up to 28W, while the GPU peaked at 33W. That's nearly double the total power consumption, which will naturally increase heat output and reduce battery life, but 61W is still well below the power draw of most discrete-GPU laptops.


More importantly, doubling power consumption practically doubled the system's performance in games. BullsLab's video compares DTT On and Off results across six games: Overwatch, PlayerUnknown's BattleGrounds, League of Legends, Elden Ring, Red Dead Redemption 2, and Lost Ark. Each title was tested at 1080p resolution, with in-game settings set to High or Ultra aside from Red Dead 2 which was at Medium.
Pleasingly, every game exhibits perfectly-playable performance at these settings. This is legitimately impressive stuff for a circa-30W GPU. In particular, e-sports games Overwatch and League of Legends frequently top triple-digit frame rates. Elden Ring and Red Dead Redemption 2 struggle a bit, but we suspect those demanding open-world games are suffering more of a system bottleneck than a GPU limitation. 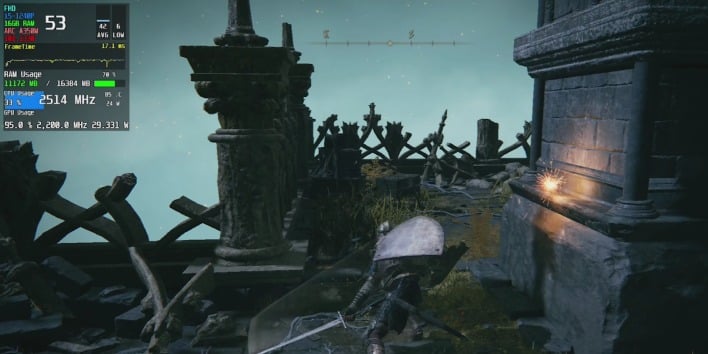 Intel's DTT is enabled by default, likely under the expectation that the Galaxy Book 2 Pro will suffer severely-shortened battery life with it off—a metric sure to be more important to Samsung's users than raw gaming performance considering the productivity emphasis of the Galaxy Book 2 Pro's marketing.

This showcase definitely seems more representative of the Arc A350M's performance, and it's much closer to what we were expecting out of this GPU. This is the first real proof we have that Arc has potential to be a legitimate competitor to the venerable GeForce and Radeon brands. Now let's hope Intel can get those driver quirks ironed out in time for the desktop cards' release.