Intel's Arctic Sound has finally made its way to market. Intel just formally introduced the datacenter GPU, now known properly as the "Data Center GPU Flex Series." The cards, which come in at least two variants, are targeted at "visual cloud" services like video transcoding, game streaming, AI, the metaverse and similar workloads.


We knew the cards were coming, because Intel told us back in May that it would have them available in Q3 of this year. Indeed, here they are – the Flex Series GPU 140 and Flex Series GPU 170. They seem to line up with the two cards that Intel teased back at its Intel Vision show. The Flex GPU 140 sports a pair of ACM-G11 GPUs (also known as DG2-128), while the Flex GPU 170 rocks a single ACM-G10 (or DG2-512). 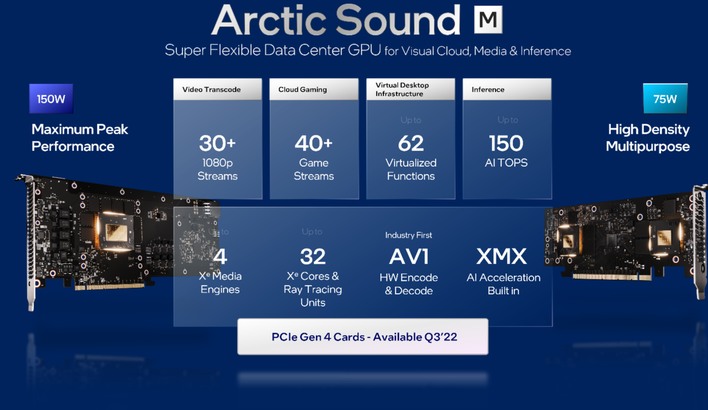 That makes the Flex GPU 170 suited for compute-intensive tasks like AI inferencing and data analytics, while the Flex GPU 140 – with its dual GPUs, each with their own pair of Xe Media Engines – is better suited to video processing workloads like video transcoding. Intel says that the Flex GPU 140 can transcode HDR AV1 or HEVC video in 8K resolution at a framerate of 60 FPS, all in real-time with a one-second delay.
If your media isn't such high-resolution, Intel promises that each card can do up to 36 streams of 1080p60 video, or eight streams of 4K60 video. Intel even claims that this capability scales in a linear fashion, so that a 4U server with 10 cards can do fully 360 streams of 1080p60 video in HEVC format. Not bad for a 75W PCIe card.
Intel also says that the Flex Series GPUs are well-suited for cloud gaming, and specifically Android cloud gaming. We're not clear how pervasive Android cloud gaming is currently, but Intel seems confident that a Flex GPU 140 can handle 46 simultaneous sessions of Knives Out in 720p30, while a Flex GPU 170 can apparently run 68 simultaneous sessions of Honor of Kings in 720p30.

Intel says that its Flex Series GPUs will be available "over the coming months" from big names like Dell, HPE, Lenovo, Supermicro, and other vendors. The early target workloads will be the aforementioned media delivery and Android cloud gaming, but Intel says that AI computing, virtual desktop infrastructure (VDI), and Windows cloud gaming are all on the docket.