It's been a long road for Intel's Arctic Sound. We first heard the codename whispered back in 2018. At one time, it was rumored to be the codename for datacenter GPUs based on "Xe-HP". As it turns out, that didn't come to fruition, and the card expected to materialize in 2020 never appeared.


Arctic Sound is real, though, and Intel just showed it to us at Intel Vision. At least, Intel showed us Arctic Sound-M, which appears to be based on Xe-HPG silicon, otherwise known as Alchemist. There are two cards -- one based on two low power ACM-G11 GPUs linked via a PCIe switch, which doubles the media engines on board, and another based on the beefier ACM-G10, although Intel only had one physical card to show us at the conference. 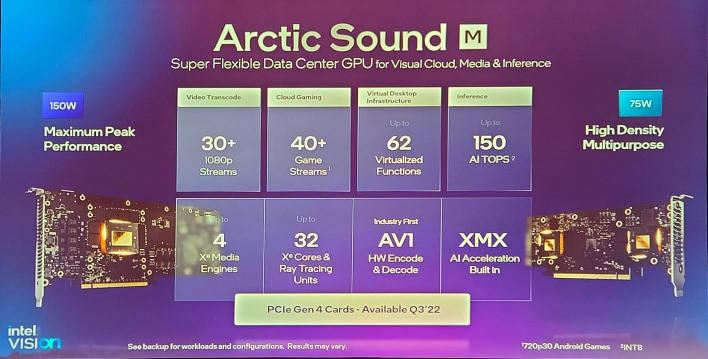 This slide that Intel showed as part of its presentation clearly indicates that there will be a 150-watt Arctic Sound-M part (pictured here) as well as a 75W "high density" card that is strapped with a pair of smaller GPUs. Both cards are PCIe 4.0 x16 accelerators intended to handle media and video operations for servers.

These parts are really meant for companies like Netflix and YouTube that need to handle thousands or even millions of video transcoding jobs simultaneously, as well as smaller deployments for organizations like hospitals that may prefer to use virtualized desktops. Intel asserts that Arctic Sound-M will be the first part on the market to offer hardware encoding of the challenging AV1 format, and that one of these cards can handle up to 30 simultaneous 1080p streams.

We don't have a ton of details on the hardware at this time, so right now we're mostly just admiring the pictures. The card that Intel had on hand to show us is a very slender single-slot GPU with a flow-through cooler lacking its own fan, as is typical for server GPUs. 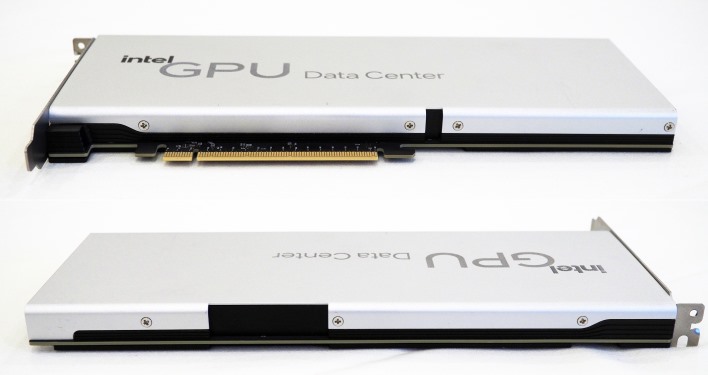 There don't appear to be any power connectors on this card, but there are cutouts for them in the aluminum shroud in two different places, both on the end of the card as well as on the top. It's possible that this is simply the low-power 75W "high density" card that doesn't require any additional power beyond what the PCIe slot can provide. It's also possible that this is just a mechanical sample with no functional elements, as all of the pads down near the golden fingers of the card appear to be empty.

Whatever the case with this card, Intel says you'll be able to order real Arctic Sound-M GPUs in Q3 of this year. Well, not you, probably, but companies building servers with these parts.