So much of the attention on Intel's 2020 CPU lineup has been on the company's upcoming Comet Lake-S and Comet Lake-H desktop processors, and whatever 10-nanometer products might be in the pipeline. Lest we forget, though, Intel will be refreshing its Xeon server processors as well. As it pertains to that, some leaked slides potentially give us some insight into Intel's plans.
Prominent leakers Momomo_US and Komachi are the sources of the latest leak, both of which highlighted upcoming Xeon parts. Starting with the latter, the Twitter user posted what looks like to be an official Intel slide outlining Intel's second generation "Barlow Pass" Optane DC persistent memory for the chip maker's Ice Lake and Cooper Lake CPUs. 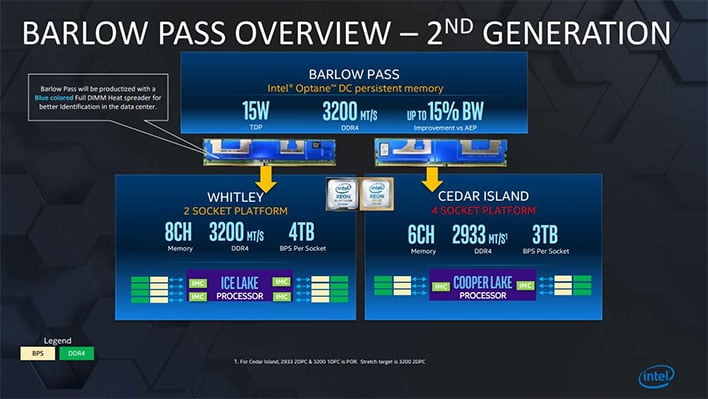 This is something Intel has already detailed to some extent. Barlow Pass succeeds Apache Pass, Intel's first generation Optane DC persistent memory that pairs with Cascade Lake-SP processors. We already know that Barlow Pass is slated to arrive this year, in conjunction with Intel's 14nm Cooper Lake and 10nm Ice Lake Xeon processors.
According to the leaked slide, Barlow Pass will serve two different platforms, those being Whitley and Cedar Island. Whitley is a 2-socket Ice Lake-SP platform, while Cedar Island is a 4-socket Cedar Lake-SP platform.
The slide shows Whitley has having 8-channel memory support and Cedar Island having 6-channel memory support. As it applies to each platform, Barlow Pass will deliver speeds of up to 3,200 MT/s and up to a 15 percent improvement in bandwidth, with a 15W thermal design power (TDP) rating.
Whitley will support up to 4TB per socket and be capable of taking advantage of the full 3,200 MT/s speed rating, while Cedar Island will support up to 3TB per socket and top out at 2,933 MT/s. The slide also indicates that Barlow Pass will ship in a blue colored full DIMM heatspreader "for better identification in the data center."
Past leaks peg Ice Lake-SP as shipping later this year and being based on an enhanced 10nm node. It's not yet clear how many cores and threads will be offered at the top end, though interestingly, Ice Lake-SP is said to support PCI Express 4.0, and might possibly be Intel's first platform to finally do so (AMD already supports PCIe 4.0 on its consumer oriented X570 chipset and its EPYC Rome processors.
As for Cooper Lake-SP, it will be another iteration of 14nm. We have yet to know for sure how many cores and threads will be offered, though according to WCCFTech, it will scale to 48 cores and 96 threads in a socketed design, and 56 cores and 112 threads as part of the Xeon-AP family. We'll have to wait and see. 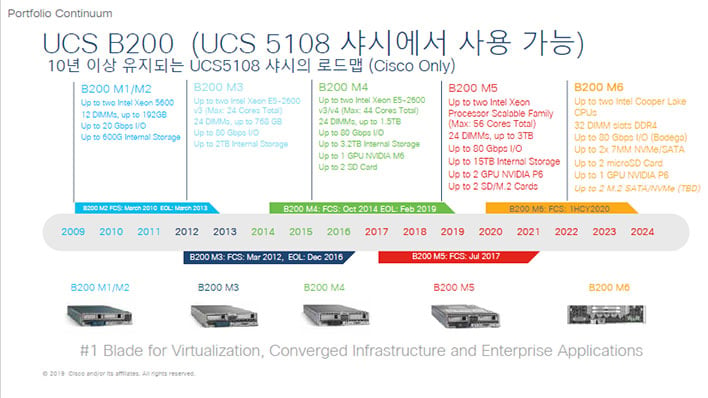 Somewhat related to all this, Momomo_US posted some slides from Cisco that outline its upcoming products based on Intel's future Xeon lineup. At the high-end, Cisco's B200 M6 blade server rack will house a pair of Cooper Lake-SP processors. It will also boast 32 DDR4 DIMM slots, an interconnect with up to 80Gbps I/O (Bodega), up to two 7nm NVMe or SATA drives, up to two microSD cards, an NVIDIA P6 tier GPU, and up to two M.2 NVMe drives.
On the opposite end of the spectrum, Cisco's B200 M1/M2 blade server rack supports up to two Xeon CPUs and has 12 DDR4 DIMM slots (for up to 192GB of RAM), up to a 20Gbps I/O interconnect, and up to 600GB of internal storage.

It's not clear when all this will come out, though rumor has it we could be looking at a Q3 launch.