In the early going, it appears as though Intel's 13th Gen Core processors (codenamed Raptor Lake) are capable of hitting higher-than-advertised clock speeds without breaking too much of a sweat. Case in point, a new listing on HWBot highlights a Core i9-13900KF processor running at 5,974.17MHz (let's just call it 6GHz, shall we?) at just 68C under load.
While the user didn't stick with traditional air cooling, they did purportedly use an all-in-one (AIO) liquid cooler to maintain reasonable temps at load with such a high frequency. That's impressive to say the least. Of course, as is often the case with this sort of thing, there are also some caveats that merit mentioning.
For one, the user had to pump the vCore to 1.57V. Additionally, the claimed 68C load temperature is from running a single-core Cinebench R23 benchmark, rather than stressing the full allotment of cores.

The Core i9-13900KF is a 24-core/32-thread processor with 8 P-cores and 16 E-core. At stock settings, the P-cores feature a 3GHz base clock and up to a 5.8GHz Turbo clock, while the E-Cores run at 3GHz to 4.3GHz. Other specs include 36MB of L3 cache, 32MB of L2 cache, 20 PCIe lanes, 125W base power, and 235W max turbo power.
Another reason this listing on HWBot is notable is because the user achieved the nearly 6GHz clock at 68C in an ASUS ROG Strix B660-F Gaming WiFi motherboard. This is encouraging because it means if you already own an Alder Lake platform on a 600-series chipset, there's the potential to achieve these kinds of results without upgrading to a 700-series board. 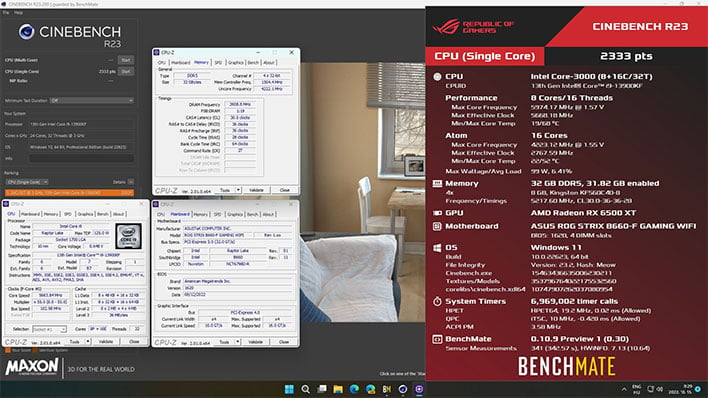