Intel is gearing up to introduce its first major new desktop architecture in a while, that being Rocket Lake-S. Even though its another round of 14-nanometer production, Intel is promising double digit IPC (instructions per clock) gains, as well as other goodies, such as PCI Express 4.0 support (a first for Intel on the desktop in the consumer sector). Ahead the new architecture's launch, an upcoming Core i9-11900K has been spotted racing along at 5.2GHz on all cores (overclocked).
The 11th Gen Core i9-11900K is poised to be Intel's top Rocket Lake-S CPU when it arrives next year. Leaks and rumors peg it as having 8 cores and 16 threads. Incidentally, that is where Intel will cap the core and thread counts for Rocket Lake-S, rather than releasing any 10-core/20-thread CPUs like it has done with Comet Lake-S (unless Intel changes its mind).
According to past leaks, the Core i9-11900K will arrive with a 3.6GHz base clock and possibly a 5.1GHz max turbo clock (single-core), along with 16MB of L3 cache. Throw Intel's Thermal Velocity Boost technology into the mix, and we could be looking at single-core turbo clocks of 5.3GHz, but we will have to wait and see.
In the meantime, someone has taken an apparent engineering sample and cranked all 8 cores to 5.2GHz. Have a look... 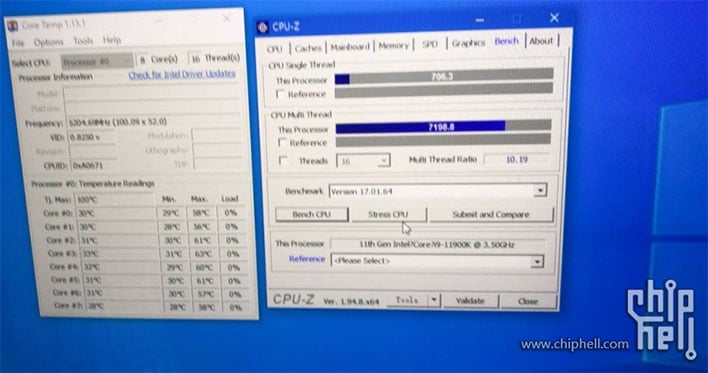 Apparently the photographer was standing and shivering in a bucket of ice during an earthquake when they took the photo, because otherwise, I have no explanation for how annoyingly blurry the above picture came out. However, we can at least see that they set the multiplier to 52x, resulting in a 5,204MHz (5.2GHz) all-core overclock.
Suggesting it was a stable OC (or at least partially stable), they benchmarked the overclocked chip in CPU-Z, obtaining a single-core score of 706.3 and a multi-threaded score of 7,198.8. How do those scores compare? To find out, we headed over to CPU-Z's validator page, which lists scores for a whole bunch of processors. Oddly, it does not contain any Ryzen 5000 series scores, so we sprinkled in some results found on the web for those processors. Here is the single-core breakdown...
The Core i9-11900K running at 5.2GHz takes the top spot in single-threaded performance, and outpaces the current-generation Core i7-10700K by quite a bit. What about the multi-core score? Let's have a look...
Here we see CPUs with more cores and threads outpace the overclocked Core i9-11900K, as we would expect. Against other processors with the same number of cores and threads, however, the overclocked Rocket Lake-S processor performs very well.
We'll have to wait and see how actual performance and overclocking capabilities play out in the real world, but this is promising. 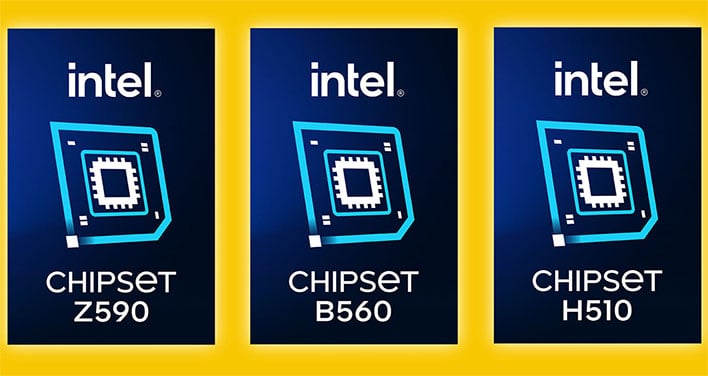 In related news, the folks at Videocardz have obtained supposed marketing imagery for Intel's upcoming 500 series chipset for Rocket Lake-S, as shown above. The image shows branding for three chipsets, including Z590, B560, and H510.
Not a whole lot of fine grain details are known just yet, other than support for PCIe 4.0, DDR4 memory support, integrated USB 3.2 Gen 2x2, and a few other tidbits.