Alder Lake and benchmark leaks have gone hand-in-hand, and that continues to be the case now that Intel has launched its initial batch of 12th Gen Core processors. The leaks keep coming because there are more Alder Lake CPUs on the horizon, both on the desktop and the first mobile/laptop parts. Regarding the latter, a Core i7-12700H has for the first time been spotted in a Cinebench benchmark leak.
We have seen this chip make unofficial appearances before, including recently—just last week we highlighted a Geekbench entry in which the Core i7-12700H hitched a ride with a Gigabyte Aorus 5 XE laptop and proceeded to crush the competition in multi-core performance. This latest benchmark leak is even more impressive, though.
Well, it's impressive if the scores are an accurate reflection of the chip's performance (you never knkow when it comes to leaks). The folks at Notebook Check obtained screenshots of the benchmark runs from an unidentified source. They appear to originate from an MSI GE76 Raider gaming laptop, which happens to be where the Core i7-12700H was spotted previously in a separate benchmark leak. 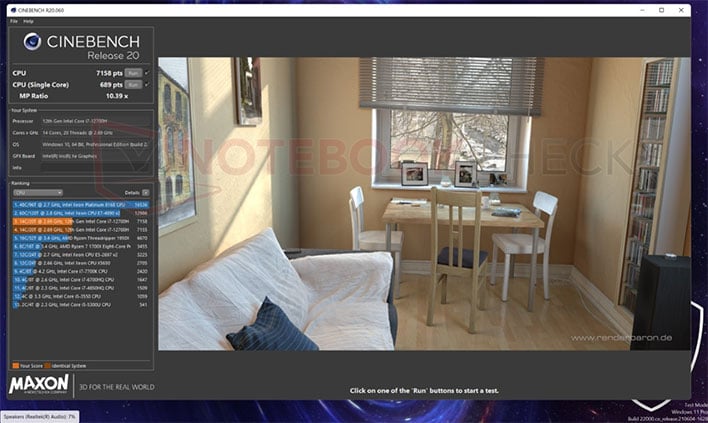