We have already seen what Alder Lake can do on the desktop (see our Alder Lake performance review), and it is quite impressive. However, the hybrid nature of the platform has the potential to be a boon for laptops, with the efficiency cores (E-cores) perhaps helping to extend battery life. We'll see in due time. For now, we're just trying to get an idea of what SKUs will manifest, and to that end there is an interesting benchmark leak highlighting a supposed Core i7-12650H chip.
In case anyone is wondering, there aren't any official laptop chips based on Alder Lake, not yet anyway. Unofficially, however, we have seen a few unannounced SKUs show up in benchmark leaks like the one we are writing about here. In this case, it's a Geekbench entry that gives us our first glimpse of the Core i7-12650H. What does it tell us? 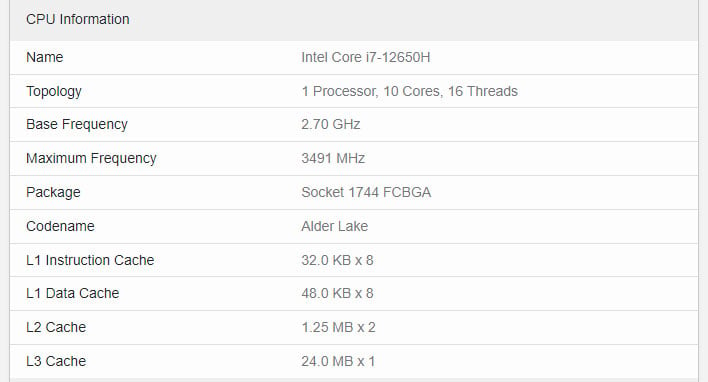 If the chip is being identified correctly, the upcoming Alder Lake-H chip will feature a 10-core/16-thread configuration. That seems odd at first glance because it actually sports fewer cores than the Core i5-12500H, which features a 12-core/16-thread configuration. So how is it that a higher-end SKU wields fewer cores than a lower-end SKU?
It comes down to the all-important core arrangement. The Core i7-12650H front loads the performance cores (P-cores) based on Golden Cove with Hyper Threading support, while the Core i5-12500H tips the scales in favor of the efficiency cores (E-cores) based on Gracemont. Or to outline it more neatly...
In theory, the Core i7-12650H should offer more performance when it comes to heavy lifting chores, while the Core i5-12500H might squeeze a bit more battery life out of laptops. How it plays out in practice, though, remains to be seen.
The listing also highlights integrated Xe-LP graphics with 64 execution units clocked at up to 1.3GHz. It posted an OpenCL score of 13,864. That's around the same as a GeForce MX350 and a bit better than a GeForce GTX 760, according to Geekbench's list of average scores.